Many people get canker sores (also called mouth ulcers or aphthous ulcers) from time to time. These are white-reddish, inflamed spots that form on the mucous membrane lining the mouth. Two to four canker sores often develop at the same time. Although they are painful, they typically heal on their own and don’t cause any problems. Some people get canker sores again just a few weeks later, while others may get them months or years later.

It is not known why these small, non-contagious inflammations occur, so there’s currently also no treatment that can prevent them from forming. The symptoms can be relieved with gels, creams or mouthwashes that contain painkilling or anti-inflammatory medication.

It is important to see a doctor or dentist if you have very many or very large canker sores that don’t go away on their own – or if you have other symptoms like bad breath or swollen lymph nodes. They can check whether you have “regular” canker sores or another condition that is causing canker-like sores in your mouth.

The main symptom of canker sores is pain. While a canker sore is forming, that part of your mouth may also tingle, burn or feel rough.

The pain might get worse when eating food that irritates the inflamed lining of the mouth even more, like bread crusts, acidic fruit or spicy dishes. The movements your mouth makes when you chew or speak can also make it hurt more.

Canker sores appear as round, whitish spots on the lips or on the inside of the cheeks. Less often, they might form on the gums, tongue or roof of the mouth. The sores are usually just a few millimeters wide, are slightly sunken and have reddish, slightly raised edges. This typical kind is also called a minor canker sore.

If the spots are larger (one to three centimeters in size), they are major canker sores. If there are very many small (pinhead-sized) sores, they are referred to as herpetiform canker sores. 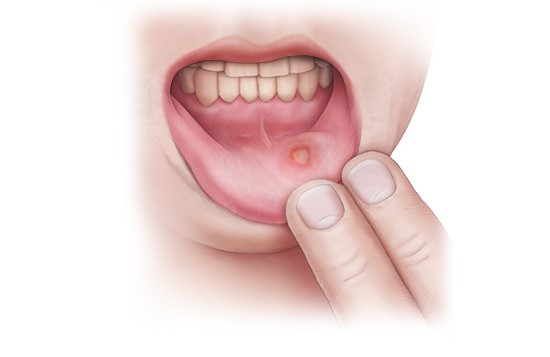 It is not really known why some people develop canker sores and others don't. They are believed to run in families and also be influenced by various other factors, including stress, a weakened immune system and hormonal changes.

These factors might also cause new canker sores to form after a symptom-free period. Experts think that certain deficiencies might be a trigger too – such as an iron or vitamin B deficiency – or that injuries to the lining of the mouth might also be involved.

Sometimes, a disease might cause inflammations in the mouth that are very similar to canker sores – like chronic inflammatory bowel disease or Behçet's disease.

Canker sores are among the most common medical conditions that affect the mucous membranes lining the mouth. Some experts estimate that about 1 out of every 10 people are affected. But it’s difficult to say exactly how many people keep getting canker sores.

Most people get them for the first time when they are a teenager or young adult. They are more common in women than in men.

The minor form is by far the most common, affecting 85% of all people who have canker sores. Only 10% have major canker sores, and 5% have herpetiform canker sores.

Before a canker sore becomes visible, you may feel a tingling or burning sensation for a few hours. The area turns red, swells up a little, and then starts to hurt. Within one to three days the swelling develops into the typical whitish spot. After a few more days the pain goes away, and after about one week the canker sore disappears completely.

Major canker sores can hurt more and for a longer time: It can take up to four weeks for them to heal. They often leave a scar in the mucous membrane.

The many small herpetiform canker sores may merge together to form larger areas. If that happens, they also cause scarring.

Most people have canker sores three to six times a year. But sometimes years may go by before the next canker sore develops. As people grow older, the symptom-free phases last longer.

Severe forms are rare. But if they do occur, major canker sores may become permanent or so painful that it’s hardly possible to eat or drink. They are also sometimes related to canker sores on the mucous membranes of the genitals.

The appearance, development and symptoms are often so typical that you can diagnose canker sores on your own without any special tests.

But if a sore hasn't healed within two weeks or the inflammations are severe, it's a good idea to see a doctor or dentist. They will examine the lining of your mouth very closely and ask you about any other symptoms and your eating habits.

If they think that another disease may be causing the sores, then a swab test, blood test, tissue sample, or an examination of certain organs (such as the bowel) may be necessary.

Canker sores usually heal on their own without any treatment. The symptoms can be relieved using gels, creams or mouthwashes that contain painkilling or anti-inflammatory medication. Other treatments like laser therapy or the use of anti-inflammatory tablets are only a good idea in severe cases.

What can you do if you have a canker sore?

When people are ill or need medical advice, they usually go to their family doctor first. In our topic "Health care in Germany" you can read about how to find the right doctor – and our list of questions can help you to prepare for your visit to the doctor.