A bitter pill, sour grapes or sweet nothings – descriptions of taste are very often associated with strong emotions. They express in words states of intense pleasure as well as displeasure.

This strong link connecting taste with emotion and drive has to do with our evolution: Taste was a sense that aided us in testing the food we were consuming. It was therefore a matter of survival. A bitter or sour taste was an indication of poisonous inedible plants or of rotting protein-rich food. The tastes sweet and salty, on the other hand, are often a sign of food rich in nutrients.

Savory dishes that taste of broth evoke pleasant emotions in most people. They are a signal that the food is rich in protein. This flavor has been recognized as the fifth basic taste in addition to the four better known tastes of sweet, sour, bitter and salty. The fact that there are sensory cells specifically for this fifth taste was discovered by a Japanese researcher around 1910, which is why the common Japanese term umami is used for “savory.”

What is generally categorized as “taste” is basically a bundle of different sensations: it is not only the qualities of taste perceived by the tongue, but also the smell, texture and temperature of a meal that are important. The “coloring” of a taste happens through the nose. Only after taste is combined with smell is a food’s flavor produced. If the sense of smell is impaired, by a stuffy nose for instance, perception of taste is usually dulled as well.

Like taste, our sense of smell is also closely linked to our emotions. This is because both senses are connected to the involuntary nervous system. That is why a bad taste or odor can bring about vomiting or nausea. And flavors that are appetizing increase the production of saliva and gastric juices, making them truly mouthwatering.

The sense of taste: from the right mix

Based on the information that is transported from the tongue to the brain, there are thought to be at least five basic qualities of taste. Many dishes are made up of a combination of different tastes. Some dishes taste sweet-sour, for example, while others are salty and savory. The basic tastes are:

What we perceive as sweetness is usually caused by sugar and its derivatives such as fructose or lactose. But other types of substances can also activate the sensory cells that respond to sweetness. These include, for example, some protein building blocks like amino acids, and also alcohols in fruit juices or alcoholic drinks.

It is mostly acidic solutions like lemon juice or organic acids that taste sour. This sensation is caused by hydrogen ions, chemical symbol: H+, split off by an acid dissolved in a watery solution.

Food containing table salt is mainly what we taste as salty. The chemical basis of this taste is salt crystal, which consists of sodium and chloride. Mineral salts like the salts of potassium or magnesium can also cause a sensation of saltiness.

Bitter taste is brought about by many fundamentally different substances. In total there are about 35 different proteins in the sensory cells that respond to bitter substances. From an evolutionary standpoint, this can be explained by the many different bitter species of plants, some of which were poisonous. Recognizing which ones were indeed poisonous was a matter of survival.

The “umami” taste, which is somewhat similar to the taste of a meat broth, is usually caused by glutamic acid or aspartic acid. These two amino acids are part of many different proteins found in food, and also in some plants. Ripe tomatoes, meat and cheese all contain a lot of glutamic acid. Asparagus, for example, contains aspartic acid. Chinese cuisine uses glutamate, the glutamic acid salt, as flavor enhancers. This is done to make the savory taste of foods more intense.

Fatty, alkaline, water-like: What else can we taste?

Researchers are looking for other sensory cells specialized for sensations besides the five established basic tastes. There are thought to be more:

Research is currently being done on these tastes:

Hot or spicy is not a taste

By the way: the sensation of something as “hot” or “spicy” is quite often described as a taste. Technically, this is just a pain signal sent by the nerves that transmit touch and temperature sensations. The substance “capsaicin” in foods seasoned with chili causes a sensation of pain and heat.

Bitter in the back, sweet in front: A common myth

There is a long-held misconception that the tongue has specific zones for each flavor where you can taste sweet or sour, for example, especially well. But this myth is based on an incorrect reading of an illustration of the tongue. You can still find these zones in many textbooks today.

Sweet, sour, salty, bitter and savory tastes can actually be sensed by all parts of the tongue. Only the sides of the tongue are more sensitive than the middle overall. This is true of all tastes – with one exception: the back of our tongue is very sensitive to bitter tastes. This is apparently to protect us so that we can spit out poisonous or spoiled foods or substances before they enter the throat and are swallowed. 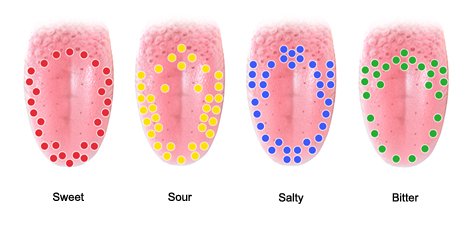 It starts at the tongue: From substance to taste

But what is taste actually? What happens in our body that enables us to perceive flavor? The chemical substance responsible for the taste is freed in the mouth and comes into contact with a nerve cell. It activates the cell by changing specific proteins in the wall of the sensory cell. This change causes the sensory cell to transmit messenger substances, which in turn activate further nerve cells. These nerve cells then pass information for a particular perception of flavor on to the brain.

The numerous wart-like bumps on the mucous membrane of the tongue are where the substance producing the taste is transformed into a nerve signal. These bumps, which are called taste papillae, contain many sensory cells with a special structure: together with other cells they make up a bud that looks a bit like an orange with its sections arranged around a center.

In the middle of the top side is a small indentation filled with fluid. The chemical substances responsible for the taste are washed into this funnel-like hollow. This makes sure that the substances are detected and analyzed by as many sensory cells as possible before being swallowed.

What are taste papillae?

The taste papillae are a good number of wart-like bumps under the mucous membrane of the tongue. They increase the surface area of the tongue several times and make sure that individual tastes can be perceived more intensely. This is also called the magnifying effect of the tongue. The papillae contain several taste buds with sensory cells.

There are three types categorized by their shape:

Fungiform papillae are the most common: between 200 and 400 bumps are spread all over the surface of the tongue. They are found mostly at the tip of the tongue and at the edges where they make sure that these areas are especially sensitive to taste. Fungiform papillae not only detect taste, they also contain sensory cells for touch and temperature. Each papilla contains 3 to 5 taste buds.

Foliate papillae can also be seen with the naked eye on the rear edges of the tongue. There you can see several folds that lie close together. Our tongue has about 20 foliate papillae, each of which has several hundred taste buds.

What are taste buds?

Taste buds are the true taste organ. They have numerous sensory cells that are in turn connected to many different nerve fibers.

Each taste bud has between 10 and 50 sensory cells. These cells form a capsule that is shaped like a flower bud or an orange. At the tip of this capsule there is a pore that works as a fluid-filled funnel. This funnel contains thin, finger-shaped sensory cell extensions, which are called taste hairs. Proteins on the surface bind chemicals to the cell for tasting. 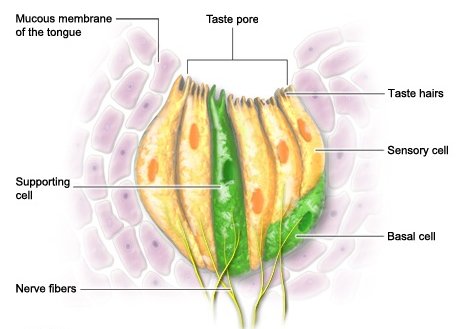 Most of the taste buds are on the tongue. But there are also cells that detect taste elsewhere inside the oral cavity: in the back of the throat, epiglottis, the nasal cavity, and even in the upper part of the esophagus. Infants and young children also have sensory cells on their hard palate, in the middle of their tongue as well as in the mucous membranes of their lips and cheeks.

The final step in perceiving taste is transfer to the nervous system. This is done by several cranial nerves. All information is carried along the cranial nerves to part of the lower section of the brainstem (the medulla oblongata). At that point there is a split: Some fibers carry taste signals together with signals from other sensory perceptions like pain, temperature or touch through several exchange points to consciousness.

The other fibers pass over these exchange points of conscious perception and leads directly to the parts of the brain that are connected with sensory perception and which are responsible for securing our survival. It is here that taste signals are combined with different smell signals.

A virtually limitless palette of flavors

About half of the sensory cells react to several of the five basic tastes. They only differ by having varying levels of sensitivity to the different basic tastes. Each cell has a specific palette of tastes with fixed rankings: this means that a particular cell might be most sensitive to sweet, followed by sour, salty and bitter, while another has its own ranking.

The full experience of a flavor is produced only after all of the sensory cell profiles from the different parts of the tongue are combined. The other half of the sensory cells and nerve fibers are specialized to react to only one taste. It is the job of these cells to transmit information on the intensity of the stimulus – how salty or sour something tastes.

Assuming 5 basic tastes and 10 levels of intensity, 100,000 different flavors are possible. Taken together with the senses of touch, temperature and smell, there are an enormous number of different possible flavors.