How does the prostate work?

The prostate is a gland about the size of a chestnut and weighs about 30 grams (about 1 ounce). It is part of the male reproductive system and is located inside the body. The prostate’s most important function is the production of a fluid that, together with sperm cells from the testicles and fluids from other glands, makes up semen. The muscles of the prostate also ensure that the semen is forcefully pressed into the urethra and then expelled outwards during ejaculation.

The prostate is located directly below the bladder and above the muscles of the pelvic floor. The rectum is behind the prostate, making it possible to feel the gland from the rectum using the finger. The ducts in the prostate gland flow into the urethra, which passes through the prostate.

The word “prostate” is taken from the Greek expression meaning “one who stands before,” which describes the position of the prostate gland. Viewed from below, where the urethra leaves the gland, the prostate “stands before” the bladder. 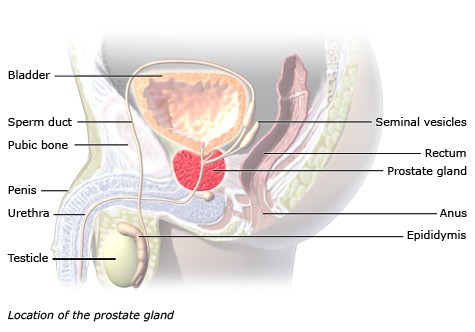 The prostate gland is surrounded by a capsule of connective tissue containing many smooth muscle fibers and elastic connective tissue, which is why it feels very elastic to the touch when it is examined. There are also many smooth muscle cells inside of the prostate. During ejaculation these muscle cells contract and forcefully press the fluid that has been stored in the prostate out into the urethra. This causes the fluid and the sperm cells, together with fluid from other glands, to combine to form semen, which is then released.

The tissue of the prostate gland can be divided into three different zones, listed here from innermost to outermost, which encircle the urethra like layers of an onion:

The transition zone tissue tends to undergo benign (non-cancerous) growth in old age.The medical term for this is benign prostatic hyperplasia (BPH). If this tissue presses against the bladder and the urethra, it can lead to difficulties urinating. This is a common problem among older men. Malignant (cancerous) tumors in the prostate mostly develop in the peripheral zone instead.

The prostate has various functions:

Production of fluid for semen:

Closing of the seminal ducts during urination: During urination the central zone muscles close the prostate’s ducts so that urine cannot enter.

Hormone metabolism: In the prostate the male sex hormone testosterone is transformed to a biologically active form, DHT (dihydrotestosterone).

How does the prostate work?