Growth in childhood and puberty

Childhood and puberty are phases of growth where our bodies gradually become heavier and taller. This growth begins in the womb and ends after puberty. But some parts of the body continue growing even after that. They include muscles that are used a lot and our hair.

What are the stages of human growth?

Humans start to grow straight after the egg is fertilized. This growth continues in the mother's womb until the embryo finally becomes a baby that is capable of living. After birth, the baby continues to grow, developing into a child, then a teenager, and finally an adult. During this process, their weight and height change. Their body proportions also change gradually. For instance, the head of a newborn is roughly one quarter of its entire height. The head of an adult is only one eighth of their height. 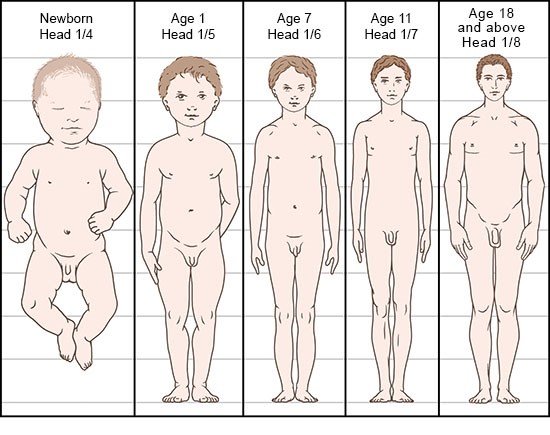 As we grow, our body proportions change

Afterwards, weight and height increase at the same time. This developmental stage is closely linked to the physical changes that occur in puberty. It ends earlier in girls than it does in boys. Girls’ bodies tend to finish growing when they’re around 16, compared to about age 19 in boys.

How is growth regulated?

The information in our genes determines which parts of this process happen where and when. This genetic blueprint also specifies the rough size of the person’s organs and their body. Hormones ensure that the genetic instructions are followed. But hormones also react to factors such as diet and illness, so what actually happens can be very different from what the blueprint says. The “growth hormone” (GH), also known as “somatotropin,” is the main hormone that regulates growth. It is made in the pituitary gland in the brain – and released into the bloodstream – during childhood and puberty. After puberty, less and less of this hormone is made.

Other hormones also play a part in regulating growth. They include the thyroid hormones and sex hormones. There are various “ growth factors” too. Some of these proteins take effect throughout the whole body during the growth phase. Some only occur in certain tissues, where they help the cells divide – sometimes after puberty, too.

What growth disorders are there?

There are some growth disorders that affect the whole body. Then the person is either smaller or much taller than most people. This can be caused by hormone issues – for example, if the pituitary gland makes too little or too much growth hormone. Not getting enough of important foods (malnutrition) during childhood or puberty can also slow down growth.

Children who didn’t get enough oxygen and nutrients in their mother’s womb can't develop properly at first. Some people’s bodies don’t manage to make up for this growth deficit later on in life. One possible reason for the lack of oxygen and nutrients is that the developing baby didn’t get enough blood through the umbilical cord and placenta. This can happen if the pregnant mother’s blood pressure is too high or if she smoked during pregnancy, for example.

Growth disorders can also be passed on from parents. This happens in people who inherit genetic skeletal deformities. Their body proportions can then be even more different to those of an average-sized person. For example, their arms and legs might be disproportionately short compared to their torso and head.

Sometimes, growth disorders only affect certain parts of the body, such as the limbs. For example, if a child or teenager breaks an arm bone, the bone might not continue to grow properly afterwards.

Growth in childhood and puberty