Many people find the thought of having living worms in their body unpleasant. That's not only true for adults. Children who have worms may also feel ashamed and disgusted. But there is no reason to feel ashamed about having worms.

And even though worms might be unpleasant, they're usually not harmful or dangerous. But they do often cause itching around the bottom at night, which can make children feel very uncomfortable.

Worm infections aren't at all unusual in children. Pinworms (threadworms) are the most common type of worms in children. These worms are whitish in color and very small, but can be seen with the naked eye. Other types of worms, like roundworms and tapeworms, are less common in Europe. 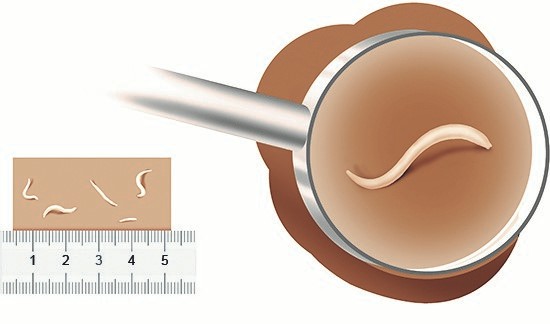 Pinworms: Real size (cm) and enlarged with a magnifying glass

One typical sign of pinworms is itching around the anus ("butthole") and bottom – especially at night. But a lot of children have no symptoms at all, or hardly any. 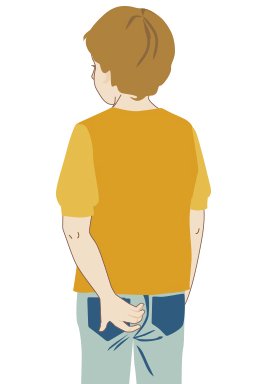 Scratching an itchy bottom is a typical sign of pinworms

If a child often scratches their bottom, they may have pinworms. In younger children, the itching might cause them to slide along the floor on their bottom or wriggle their legs about.

Because the itching is often worst at night, it can affect their sleep.

The worms can sometimes be found around the anus, in underwear, or in the child's bed. Worms that leave the body in stool (poo) can't always be seen.

Children get worms when they swallow pinworm eggs. The eggs are so tiny that you can't see them with the naked eye or feel them. So children don't notice it when they swallow them. Worm eggs can get onto their fingers and are also found on things like toys and food, or in dust. But how do the worm eggs get there?

If a child swallows worm eggs, that can start a cycle: The eggs get into their bowels, where they grow into worms. Then the worms lay new eggs around the anus. Worm eggs are quite sticky and cling on well. They can then easily get onto your fingers if you scratch your bottom, and then spread to objects or food when you touch them with your fingers. Worm eggs also often get stuck under the fingernails when scratching, and can easily stay there even after washing hands. The eggs may be swallowed by other children or by the same child again. Worm eggs are usually infectious for up to 5 days.

It takes around 2 to 6 weeks for swallowed eggs to turn into worms that lay more eggs. To do so, they crawl through the bowels towards the anus and lay thousands of new eggs in the skin folds there. That mainly happens at night when the child is asleep. The laying of the eggs can cause itching and make the child want to scratch.

The worm eggs sometimes pass from the anus to underwear or bedding. Because they're so small, they may be thrown up into the air and swallowed when shaking out bedding. That rarely happens, though.

Humans are the only hosts for pinworms. That means they can't be passed on by other animals or in the stool (poo) of other animals.

Adults who have close contact with children in this age group can also become infected, but it's not known how often that happens.

If pinworm infections aren't treated, children often "infect themselves" time and again. Because of this, worms don't usually go away on their own. They are also easily spread within the family. You can only get rid of worms properly if all the affected family members and close contacts are treated.

If there are a lot of worms in the bowels, they can cause belly ache, nausea and vomiting. Inflammations may occur, for instance in the bowels or vagina, but this very rarely happens.

If the skin around the anus is irritated by scratching, bacterial infections are more likely to develop there. The possible symptoms of a bacterial include very red skin and a rash.

If children have an itchy anus and regularly scratch their bottom, they're quite likely to have pinworms. A doctor can find out whether the itching really is being caused by worms.

Doctors will usually suggest doing a sticky tape test. This involves firmly pressing a piece of see-through sticky tape onto the child's anus in the morning. The tape is then removed and stuck onto a thin piece of glass (a glass slide). This is examined under a microscope in the doctor's practice, to look for worm eggs.

Parents do the sticky tape test with their child at home, on three days in a row – in the morning, before the child goes to the toilet or while changing the first diaper of the day. The glass slides with the test strips are collected and examined later in the doctor's practice.

Doctors usually suggest that other family members also do the test because it's common for more than one person in a family to have worms.

You can sometimes see the worms without doing a test, such as on the child's bottom, in their underwear, bedding, or poo.

Pinworms can usually be treated effectively with medication known as anthelmintics (anti-worm drugs). If the doctor confirms that the child has worms, they will give you a prescription. Sometimes all of the child's family members have the treatment as well.

The medication is available as a tablet to be swallowed, a chewable tablet, or a syrup that younger children can swallow too. The medication only has to be taken once at first. It is taken again after two to four weeks, to get rid of all the worms and prevent a new .

Anti-worm drugs are usually well tolerated. If side effects occur, the most common ones are belly ache, diarrhea, gas, nausea, and vomiting.

Apart from anti-worm drugs, good hygiene is also an important part of treatment. Otherwise, the child will almost certainly keep getting worms again and again. Here are some tips for good hygiene:

Doctors sometimes recommend not shaking out bedding, to avoid throwing eggs up into the air where they can spread around the room with the dust. If you think that objects like toys might have worm eggs on them, you can clean them with soap under hot running water, or put them in the dishwasher or washing machine.

Even after successful treatment, it's still a good idea to stick to simple hygiene rules like regularly washing hands and making sure your child doesn't put their fingers in their mouth. That reduces the likelihood of getting worms again (and other illnesses).

A child who has worms can still go to kindergarten or school. Because they might infect other children, it's important that you tell close contacts and the parents of your child's friends about the worm , and pay attention to good hygiene.

Nobody should feel ashamed about having worms. It is quite common for children to catch them in kindergarten and at school – much more common than many parents might think. But you aren't legally obliged to tell public institutions like kindergartens or schools that your child has worms.

If a child is ill or has a health-related problem, parents usually go to see their pediatrician or family doctor first. You can read about how to find the right doctor in our "Health care in Germany" topic, and our list of questions can help you to prepare for your appointment.