Acute pancreatitis is an inflammation of the that typically causes very sudden and very severe upper abdominal pain. It is most commonly caused by gallstones or drinking too much alcohol.

The acute usually clears up within one to two weeks. But it may also lead to complications and other illnesses. The treatment may then take several months.

Pancreatitis is treated in a hospital because the complications can sometimes become life-threatening.

Acute pancreatitis almost always causes severe upper abdominal pain. The pain can spread to your back and is usually accompanied by nausea and vomiting. Other common symptoms include fever, a bloated stomach and feeling weak and light-headed.

The pain is usually sudden and so severe that most people go straight to a doctor. They typically go to a hospital the same day.

Acute pancreatitis is most commonly caused by gallstones. The pancreas produces digestive juices that flow into the duodenum (the first section of the small intestine) through a tube called the pancreatic duct. Just before the pancreatic duct reaches the duodenum, it is joined by the common bile duct. If gallstones form and enter the common bile duct, they may end up blocking the shared opening. As a result, the bile and pancreatic juices can't flow out into the duodenum and they start to build up. This is probably what causes the to become inflamed.

The digestive juices usually don't start to work until they reach the small intestine. But if the is inflamed, they already become active in the . As a result, the starts “digesting itself.” 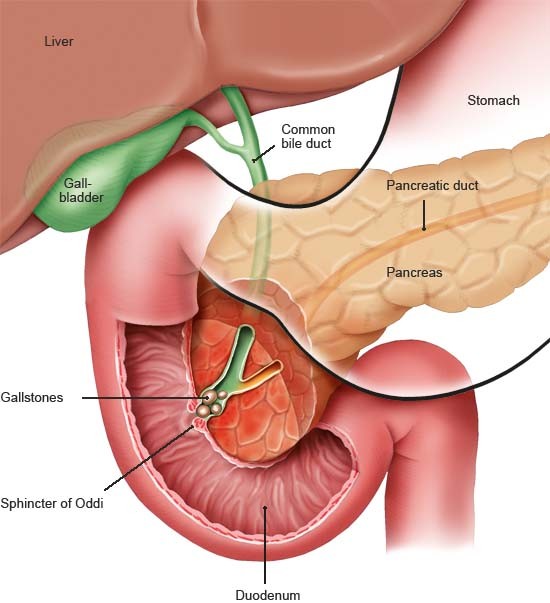 Gallstones blocking the opening into the bowel

The second most common cause of pancreatitis is drinking too much alcohol. It is still not known exactly how alcohol causes pancreatitis, but the link has been observed in many studies.

Other factors that can increase the likelihood of pancreatitis include a narrowing of the bile duct and high levels of specific fats (triglycerides) or in the bloodstream. Acute pancreatitis is sometimes also caused by medications or a viral . Surgery on the gallbladder or bile ducts can cause pancreatitis too, but only in very rare cases.

In as many as 10 out of 100 cases of pancreatitis, no clear cause is found.

In Germany, about 55,000 people are treated at a hospital for acute pancreatitis every year. That's about 70 out of every 100,000 people. Most people who develop pancreatitis are over the age of 45, and it's somewhat more common in men than in women.

The course of pancreatitis can vary depending on how severe the is and how badly it damages the tissue. About 80% of people who have treatment for acute pancreatitis recover within about one to two weeks. About 20% of them develop serious complications. For instance, part of the the may die and become infected with . It can then take weeks or even months to get better again.

After leaving the hospital, some people still have pain or problems with digestion, or they might feel very exhausted. It can take a long time to recover and return to everyday life, and there may be setbacks.

If caused by gallstones, pancreatitis often occurs again. To prevent this from happening, doctors recommend removing the gallbladder.

One common complication of acute pancreatitis is something called pseudocysts. These digestive-juice-filled sacs may develop in the several weeks after the arises. Pseudocysts often remain small and go undetected, but they sometimes become so large that they cause problems like indigestion or bloating. Larger pseudocysts are also at risk of tearing open and bleeding or causing an .

A rare but serious complication of pancreatitis is called infected pancreatic necrosis. This complication occurs if a part of the dies (“necrotizes”) and becomes infected with . It usually starts in the second or third week after pancreatitis has developed and is very dangerous because it can provoke a condition referred to as SIRS (systemic inflammatory response syndrome). In SIRS, the spreads from the to the entire body. The first warning signs may include a high or low body temperature, a drop in blood pressure and a faster heart rate or breathing rate. SIRS can cause organ failure in one or several organs.

Overall, about 3 to 5% of people who develop acute pancreatitis die of complications.

To find out whether you have acute pancreatitis, the doctor will first feel your abdomen (belly) with their hands. They will also ask about various risk factors for pancreatitis, such as alcohol consumption, medication use and possible signs of gallstones such as a cramping pain in the upper abdomen (biliary colic). They usually take a sample of blood and will likely also do an ultrasound scan. If you are diagnosed with pancreatitis, you will be referred to a hospital. The symptoms of pancreatitis can also be caused by other medical conditions, such as an inflamed gallbladder, a heart attack or a gastric perforation from an ulcer.

Various things are measured in the blood sample, including the lipase levels in the blood. Lipase is an enzyme that is made in the and usually flows into the intestine. Abnormally high levels of lipase in the blood are a sign of pancreatitis. Having certain other substances in the blood can be a sign of a blocked bile duct.

Sometimes more testing is needed. For instance, a (MRI) scan can be done to create a picture of the bile ducts and any gallstones. Another option is to use an to look for gallstones in the bile duct. This involves pushing a flexible tube with an ultrasound device at the end of it into the duodenum through the food pipe (endoscopic ultrasound).

A (CT) scan can be used to detect complications such as dying tissue and to get an idea of how the is developing. If the pancreatitis is associated with gallstones or a bile duct , endoscopic retrograde cholangiography (ERC) may be needed for the . This also involves passing an through the food pipe and down to the bile duct opening in the duodenum. A contrast medium (dye-like substance) is then injected into the duct to make any stones that are there show up in the x-ray image. With the help of the , these stones can also be removed during the examination. But ERC involves exposure to radiation, and may cause various complications.

Although there aren't any treatments that fight the cause of pancreatitis, there are a number of treatment options that aim to reduce the strain on the and relieve the symptoms. Because acute pancreatitis often leads to dehydration, people are first given extra fluids through a drip. Medication can provide relief from pain, nausea and vomiting. Stronger painkillers known as opioids are often needed, and they may make you feel drowsy or light-headed.

To give the a chance to recover, solid foods are avoided until you feel better again and your appetite returns. In mild cases of pancreatitis, it's often possible to return to eating solid foods after just two days. If the symptoms last longer, artificial feeding may be necessary to supply your body with enough nutrients.

If the pancreatitis is caused by gallstones, the stones may need to be removed soon using endoscopic retrograde cholangiography. After having acute treatment for pancreatitis, the gallbladder is surgically removed to prevent relapses.

If the pancreatitis was alcohol-related, people are advised to drink a lot less alcohol afterwards. This is often difficult, but there are many places that offer support when trying to cut down on alcohol.

How is acute pancreatitis treated?