Blood is a vitally important fluid for the body. It is thicker than water, and feels a bit sticky. The temperature of blood in the body is 38°C (100.4°F), which is about one degree higher than body temperature. How much blood you have depends mostly on your size and weight. A man who weighs about 70 kg (about 154 pounds) has about 5 to 6 liters of blood in his body. Blood has three important functions:

The blood transports oxygen from the lungs to the cells of the body, where it is needed for metabolism. The carbon dioxide produced during metabolism is carried back to the lungs by the blood, where it is then exhaled (breathed out). Blood also provides the cells with nutrients, transports and removes waste products, which organs such as the liver, the kidneys or the intestine then get rid of.

The blood helps to keep certain things in the body in balance. For instance, it makes sure that the right body temperature is maintained. This is done both through the liquid part of the blood (plasma), which can absorb or give off heat, as well as through the speed at which the blood is flowing: When the blood vessels expand, the blood flows more slowly and this causes heat to be lost. When the temperature outside the body is low, the blood vessels can contract to reduce the amount of heat lost. Even the pH value of the blood is kept at a level ideal for the body. The pH value tells us how acidic or alkaline a liquid is. A constant pH value is very important for things in the body to function properly.

This involves solid parts of the blood such as blood platelets and various substances that are dissolved in the blood plasma. If a blood vessel is damaged, these parts of the blood stick together (clot) very quickly and make sure that a scrape, for instance, stops bleeding. This prevents large amounts of blood loss. White blood cells and certain chemical messengers also play an important role in the .

Blood is made up of about 55% blood plasma and about 45% different types of blood cells. Blood plasma is a light yellow, slightly cloudy liquid. Over 90% of blood plasma is water, while less than 10% consists of dissolved substances, mostly proteins. Blood plasma also contains electrolytes, vitamins and nutrients such as glucose and amino acids. Over 99% of the solid particles in blood are cells known as red blood cells (erythrocytes) due to their red color. The rest are pale or colorless white blood cells (leukocytes) and platelets (thrombocytes). 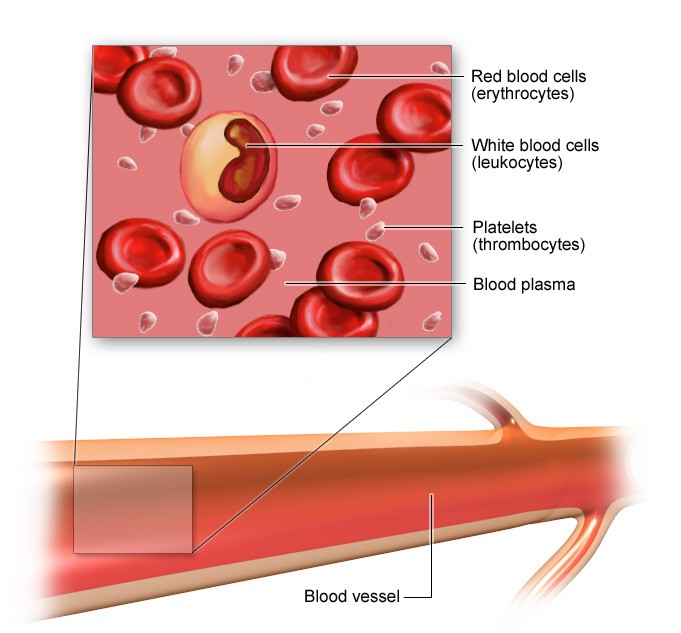 Blood is made up of plasma and blood cells

Red blood cells look like discs that are thinner in the middle. They can easily change shape to “squeeze through” narrow blood vessels. Unlike many other cells, red blood cells have no nucleus ("information center"). All red blood cells contain a red pigment known as hemoglobin. Oxygen binds to hemoglobin, and is transported around the body in that way. In tiny blood vessels in the lung, the red blood cells pick up oxygen from inhaled (breathed in) air and carry it through the bloodstream to all parts of the body. When they reach their goal, they release it again. The cells need oxygen for metabolism, which creates carbon dioxide as a waste product. The carbon dioxide is absorbed from the cells by the blood plasma (some of it binds to hemoglobin too) and is transported back to the lungs in the bloodstream. There it leaves the body when we breathe out.

Red blood cells can also pick up or release hydrogen and nitrogen. By picking up or releasing hydrogen they help to keep the pH of the blood stable; when they release nitrogen the blood vessels expand, and blood pressure falls. Red blood cells live for about 120 days. When they're too old or damaged, they're broken down in the bone marrow, spleen or liver.

White blood cells play an important role in the immune system. Here the different blood cells have different functions: Some fight intruders such as bacteria, viruses, parasites or fungi themselves and render them harmless. Others make antibodies, which specifically target foreign objects or germs like viruses. Leukocytes also play a part in allergic reactions: For instance, they are the reason why people with a dust mite get a runny nose when they come into contact with dust. Certain lymphocytes can also kill cancerous cells that have developed elsewhere in the body. Most white blood cells have a lifespan of only a few hours to several days. Some lymphocytes can stay in the body for many years, though.

Blood platelets (thrombocytes) also look like little discs, as do red blood cells, and they also have no cell nucleus. But they are much smaller than red blood cells. They play an important role in blood clotting: If a blood vessel is damaged – for instance, if you accidentally cut yourself with a knife – the healing process begins with blood platelets gathering and clumping together on the inside of the damaged wall of the blood vessel. This quickly causes a plug to form and close the wound temporarily. At the same time, strong protein threads are made and they hold the clump in place, attached to the wound. usually live only 5 to 9 days. Old thrombocytes are mainly broken down in the spleen.

All solid parts of the blood come from common parent cells known as stem cells. In adults, blood cells are mainly produced in the bone marrow. The various blood cells develop in several stages from stem cells to blood cells or blood platelets. White blood cells such as lymphocytes don't only mature in the bone marrow, but also in the lymph nodes. When the cells are ready, they are released into the bloodstream. In addition to these mature cells, the blood still contains a small number of precursor cells.