The is 12 to 18 centimeters (about 4.7 to 7.1 inches) long and weighs about 70 to 100 grams. It is made up of a head, a body and a pointy tail-like end. Located in the upper abdomen behind the stomach, it has two important functions: It produces 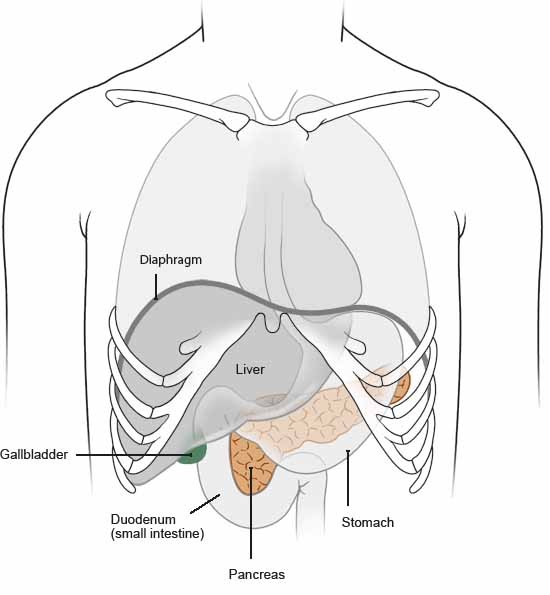 Position of the pancreas

The exocrine cells of the pancreas

The exocrine cells produce digestive juices – about 1.5 to 2 liters per day. They are called exocrine ("secreting outside") because the digestive juices that they produce flow out into the small intestine rather than directly into the bloodstream. This clear, colorless fluid is mainly made up of water and also contains salt, sodium bicarbonate and digestive enzymes. There are three main types of enzymes:

The digestive juices usually only start working once they enter the small intestine. But if the is inflamed (pancreatitis), they already become active in the . As a result, the starts “digesting itself.” 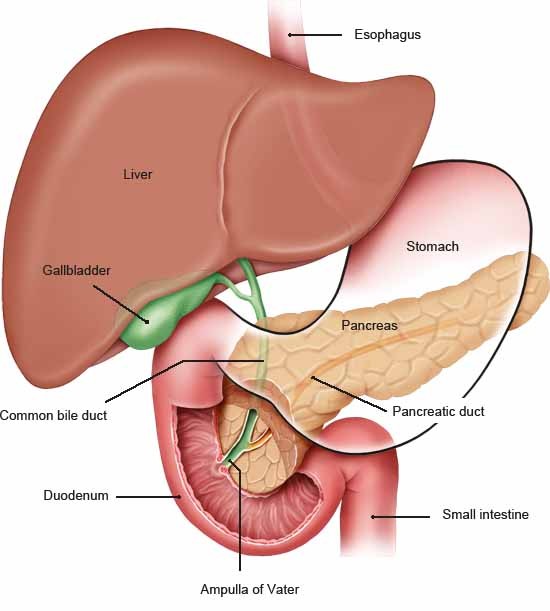 The endocrine cells of the pancreas

Groups of endocrine cells are found throughout the . They are called islets of Langerhans because they are scattered like small islands (“islets”) and were discovered by the pathologist Paul Langerhans. These groups of cells produce insulin, glucagon and other . They are called endocrine ("secreting internally") cells because the that they produce are secreted directly into the blood. These usually help to regulate blood sugar levels, stopping them from getting too high or too low.

When the blood sugar levels rise, as they do after a meal, insulin is released by the islets of Langerhans. This hormone helps sugar to be absorbed from the bloodstream into the cells of the body. Insulin also allows the liver and the muscles to store sugar, as well as keeping the liver from producing more sugar. This lowers your blood sugar levels.