Kidney stones are small, hard deposits that can form in a part of the kidney called the renal pelvis. Those that enter a ureter are sometimes referred to as ureteral stones. The ureters are the tubes that carry urine from the kidneys to the bladder.

Many of these stones are so small that they are able to travel to the bladder in just a few days or weeks without any treatment, and then exit the body in your urine. If smaller stones are causing problems, it's often enough to take painkillers, drink plenty of fluids, move enough and simply wait for the kidney stones to pass through. Muscle-relaxing medications can be used to help pass medium-sized stones.

Larger stones may get stuck as they exit the renal pelvis or take longer to move through the ureter, causing severe pain and other symptoms. Then they usually need to be broken up by sound waves or removed through a minor surgical procedure. The most suitable treatment will depend on the size, type and position of the stones in the kidney or the urinary tract.

It's common to have kidney stones multiple times. Finding the cause is a necessary part of preventing that from happening.

Many people have kidney stones that go unnoticed and are discovered only by chance. Some might feel slight discomfort near their kidneys, but not attribute it to a kidney stone.

Kidney stones often go unnoticed until they block the renal pelvis or travel through the ureter. The main symptom is pain, which can range from feeling just a little unwell to waves of severe pain. The pain may affect your lower abdomen, belly or back "flank pain," depending on which part of the ureter the stone is in.

Certain parts of the two ureters are naturally narrower – for example, where they meet the bladder. The pain is especially severe if a kidney stone travels through one of these narrower passages. Sudden attacks of severe pain on one side, sometimes radiating into your lower abdomen, are common. This is sometimes referred to as renal colic. The intensity of pain gets stronger and weaker in waves, sometimes accompanied by nausea and vomiting. Some people also toss and turn to find a position that helps to relieve the pain. An episode of renal colic usually lasts from 20 to 60 minutes. 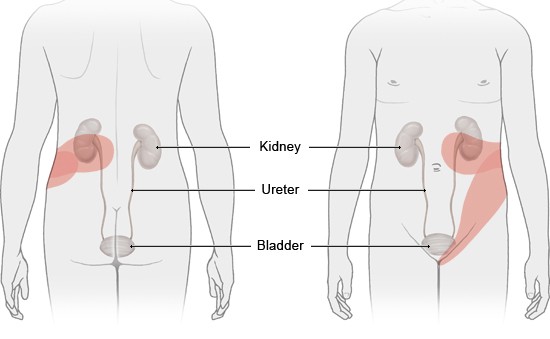 Other possible symptoms of a kidney stone passing through the ureter include blood in your urine, painful urination, and a stronger or more frequent urge to urinate. The pain can sometimes spread to your genitals as well.

Small kidney stones don't always cause symptoms. They're sometimes first noticed when they exit the body in urine. Or they may be detected by chance in x-rays or ultrasound scans of the belly area (abdomen). 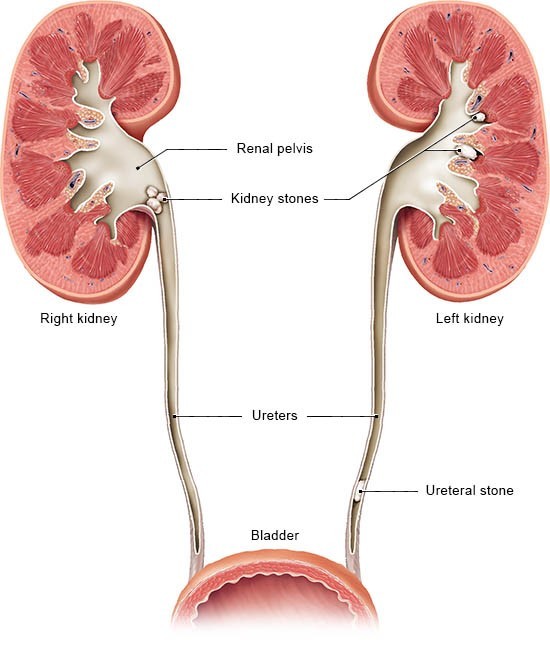 The kidneys and ureters, with stones in various places

Kidney stones form when certain substances in the urine turn into crystals. These substances are often calcium salts, but uric acid or other minerals sometimes form stones too:

Stones of any other substances are rare.

Usually, these substances are dissolved in the urine. But some medical conditions cause their concentration in the urine to rise, resulting in crystals. For instance, if the parathyroid glands are overactive, the level of calcium in the urine will rise. Gout increases the level of uric acid. Sometimes, but rarely, the excess levels are genetic. This is the case if the stones are made of the amino acid cystine, for example.

Nutrition is a factor too: Some foods, such as rhubarb, contain high levels of oxalic acid. Offal may increase uric acid levels. These higher levels can result in kidney stones. The concentration of substances that can potentially form stones also increases if we don't drink enough fluids.

One other cause might be a lack of substances that usually prevent the formation of stones in the urine, the main one being citrate. A citrate deficiency may result from chronic diarrhea, for example.

As well as the balance of substances that form and dissolve stones, the acidity of the urine plays a role: Most types of kidney stones form if the urine is too acidic. But stones may also develop if the urine becomes less acidic and more alkaline – for instance, during a urinary tract infection (UTI).

Certain medications can create favorable conditions for kidney stones, too – either because they form crystals in the urine themselves or because they change the composition of the urine.

Some people have a higher risk because of abnormal anatomical features, such as kidney cysts or a "horseshoe" kidney. It is called a "horseshoe kidney" when the lower ends of both kidneys are attached to each other.

Kidney stones are very common: Every year, 1 to 2% of the German population develops kidney stones. Based on estimates in the U.S., at least 10% of people will have kidney or ureteral stones at some point in their life. Men are at higher risk than women. Kidney stones can affect people of any age, even children, but are most common in people between the ages of 40 and 60.

Kidney stones usually only cause symptoms once they've entered the ureter. The symptoms depend mostly on how large the kidney stones are:

Up to 50 out of 100 people who are treated for a kidney or ureteral stone have one again within five years – and some get them even more often – so preventive measures are important.

Left untreated, kidney stones can block the ureters or make them narrower. This increases the risk of infection, or urine may build up and put added strain on the kidneys. These problems are rare because most kidney stones are treated before they can cause complications. Signs of an infection of the upper urinary tract include fever, chills, side and low back pain, and nausea or vomiting.

The usual symptoms of kidney stones can provide a basis for a diagnosis, but they aren't always enough to tell what the exact cause is. Ultrasound scans can be used to detect most kidney stones. If doctors still aren't sure, they may also use a computed tomography (CT) scan.

An x-ray of the kidneys, ureters and bladder is less exact because some stones don't show up: Calcium stones are easy to detect, but struvite stones are harder to see and uric acid stones don't appear at all. But x-ray images can help to determine how successful treatment for calcium stones was.

Blood and urine tests are also important. These tests can help provide evidence of the possible causes, for instance by showing whether you have an infection or high levels of calcium or uric acid.

Some stones are detected by chance in x-rays or ultrasound scans of the belly area (abdomen).

When kidney stones are treated without doing anything about the cause, they often come back. The most suitable type of prevention will then depend on what the kidney stones are made of and what caused them. It can help to keep track of the kidney stones that you pass in your urine. One way to do this is to use a filter or sieve to catch them when you urinate. Stones that are removed in a surgical procedure are analyzed in a laboratory.

To prevent more kidney stones from forming, experts recommend drinking a lot of fluids – more than the typically suggested 1.5 liters per day. You can talk about how much is the right amount with your doctor.

Depending on the cause of the kidney stones, it may help to change your diet – for instance, by eating less meat or salt. Medication that can affect the pH level of your urine or lower the levels of calcium or uric acid may be considered too. The best ways to prevent kidney stones will also depend on your individual risk of getting them again.

If you have small kidney stones that aren't causing you any trouble, all you need to do is wait until they pass out of your body in your urine. It's possible to tell by their size and location whether they can pass on their own.

Painkillers like diclofenac, ibuprofen, acetaminophen (paracetamol) or metamizole can be used to relieve any pain caused by the stones. Stronger painkillers (opioids) may be considered for very severe pain.

If the kidney stones are 5 to 10 millimeters in diameter, certain medications (alpha blockers) can help to relax the muscles and allow the stones to leave the body. Larger kidney stones usually need to be removed. Depending on how large the kidney stones are and where they're located, sound waves can be used to destroy them or they can be removed using endoscopy or a minor surgical procedure.

Pathan SA, Mitra B, Cameron PA. A Systematic Review and Meta-analysis Comparing the Efficacy of Nonsteroidal Anti-inflammatory Drugs, Opioids, and Paracetamol in the Treatment of Acute Renal Colic. Eur Urol 2018; 73(4): 583-595.