The thyroid gland makes that control many of the processes in our body. The thyroid is said to be underactive if it doesn't produce enough . This condition is also referred to as hypothyroidism. It can lead to various problems, such as tiredness, lethargy, changes in the skin, and constipation.

Chronic of the thyroid gland is the most common cause of an underactive thyroid. The problem can be corrected by taking tablets containing thyroid every day. This usually makes the symptoms go away.

If the thyroid doesn't produce enough , your metabolism (a set of chemical reactions in the body) slows down. That can affect various body functions and cause a number of different symptoms. For example, a reduction in physical fitness. Symptoms of this might include:

Mental health or cognitive problems are also possible. For instance:

It can lead to certain physical changes too, such as: 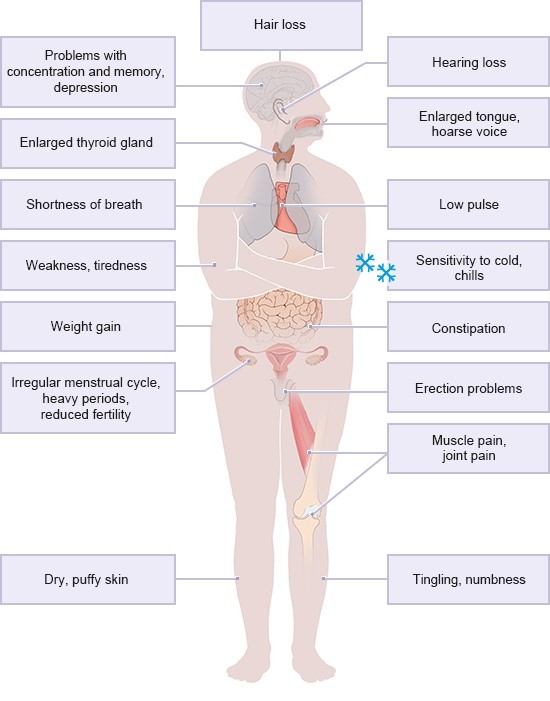 An underactive thyroid gland can cause a number of different symptoms

If an underactive thyroid in children or babies is left untreated, it can slow their physical growth and mental development. This is very rare in Germany and other industrialized countries though because it's usually detected right after birth and then treated effectively.

There are various reasons why the thyroid gland might not produce enough :

How an underactive thyroid develops over time will depend on what's causing it. It often develops slowly because it is very commonly caused by an of the thyroid gland. This usually leads to the gradual loss of thyroid tissue, which can go unnoticed for a long time: The remaining tissue makes up for this by producing more . But symptoms arise when that is no longer possible. If an underactive thyroid isn't treated, various problems can develop.

Sometimes the thyroid get better on its own, though – for instance, if the goes away.

Your doctor will ask about your symptoms and examine the thyroid by feeling your neck. Because many of the symptoms of an underactive thyroid could have other causes, blood tests are done to get a clear .

The tests measure the levels of various in your blood. These include the thyroid themselves. But another hormone called TSH (thyroid-stimulating hormone) is important too. It is produced in the pituitary gland, not in the thyroid. As its name suggests, TSH stimulates the thyroid gland to produce thyroid .

A higher level of TSH in your blood may be a sign of an underactive thyroid. This is because as soon as the thyroid gland gets weaker, the pituitary gland responds: It increases the amount of TSH it makes in order to stimulate the thyroid to make more thyroid . But this is not enough if the thyroid is very underactive: The thyroid still can't release enough into the bloodstream. This can also be seen in a blood test.

Newborns are routinely screened for high TSH levels in order to detect an underactive thyroid early on so that it can be treated sooner. If the results are abnormal, doctors also measure the level of thyroid .

Screening is not recommended in adults because abnormal TSH levels don't automatically mean that the thyroid isn't producing enough and causing problems. What's more, TSH levels that are just a little high very often go down on their own, but it can sometimes take a while. So abnormal levels could lead to unnecessary further testing, treatments and worry.

If your TSH is high but your thyroid gland is still making enough and you don't have any symptoms, it's known as subclinical (latent) hypothyroidism.

Each year in Germany, 2 to 5 out of 100 people who have subclinical hypothyroidism develop an underactive thyroid with symptoms. It's not clear whether this can be prevented with early treatment, though.

Experts recommend that you make sure that you get enough iodine in your diet. You can do this by having milk or dairy products on a daily basis and eating saltwater fish regularly. The use of iodized table salt is also recommended.

Some dietary supplements have iodine in them too. Taking them on a daily basis can cause problems if the supplements contain more than 100 µg (micrograms) of iodine. If you take too much iodine over the long term, it increases your risk of developing an overactive thyroid. It's almost impossible to get too much iodine from food and drink, though. One exception is dried algae, especially seaweed and kelp.

Complications can arise over the long term if an underactive thyroid isn't treated. The effects can be serious, especially in children. Some are permanent – such as dwarfism (short height), partial or full loss of hearing, and problems with mental and cognitive development. The of newborns and early treatment are now used to prevent these kinds of problems.

If an underactive thyroid is left untreated in adults, complications such as cardiovascular (heart and blood vessel) disease, confusion and drowsiness are possible. In very rare cases it can lead to a coma.

If the levels of thyroxine (a thyroid hormone made in the body) are too low, a medication that is similar to this hormone is used to replace it. This medication is called levothyroxine or L-thyroxine. It keeps the hormone levels within the normal range, and the symptoms typically go away completely. It takes about two to three months for the body's hormone levels to return to normal. Depending on the cause, treatment for an underactive thyroid may be temporary or lifelong.

Thyroxine is taken as a tablet once a day. Doctors often recommend taking the tablet with a glass of water half an hour before breakfast. It is thought that the body can absorb the medicine better on an empty stomach. But you can also take the tablet in the evening before going to bed.

Taken at the right dose, side effects are very rare. The dose is determined based on the person’s body weight. If the dose is too high it can cause nervousness. So the dose is checked regularly during the first few weeks of treatment and changed as needed. After that, it usually only has to be checked once a year.

In subclinical hypothyroidism, only the TSH levels are higher. The thyroid hormone levels are normal. Experts disagree on whether it should be treated.

Are there benefits to treating subclinical hypothyroidism?