Chickenpox is a highly contagious viral infection that mainly affects children. Typical symptoms include a very itchy skin rash with red blisters and a mild fever. Because most children are now vaccinated, chickenpox (also referred to as varicella) is much less common than it was in the past.

If someone becomes infected with chickenpox, they are contagious after just 1 or 2 days, which is before they have any visible rash. But taking precautions and paying attention to hygiene can help to avoid infecting others. Although chickenpox is unpleasant, it rarely has any serious consequences in children who are otherwise healthy. But it may become more severe in newborns and adults, as well as people who have a weakened immune system.

If you get chickenpox you feel generally ill at first. It causes muscle pain and headache, and your body temperature rises. The itchy rash typical of chickenpox develops next, usually on your face and torso first, and later spreading to your scalp, arms and legs. Sometimes mucous membranes and the genitals are also affected. The extreme itching is often the main problem, making it hard to sleep. Adults who have chickenpox may not develop a rash, or it may not spread over their body in the same way as it does in children.

The fever lasts 3 to 5 days, but is rarely higher than 39 °C (about 102 °F). The rash starts as small red spots and bumps, which then turn into blisters. The blisters contain clear fluid that later turns cloudy. They dry up after a few days. Scabs form and soon fall off. It usually takes about 3 to 5 days for the blisters to heal. Because the blisters on the skin are in different stages of development at any given time, their distribution is sometimes described as a “starry sky.” The total numbers of blisters varies widely from person to person. 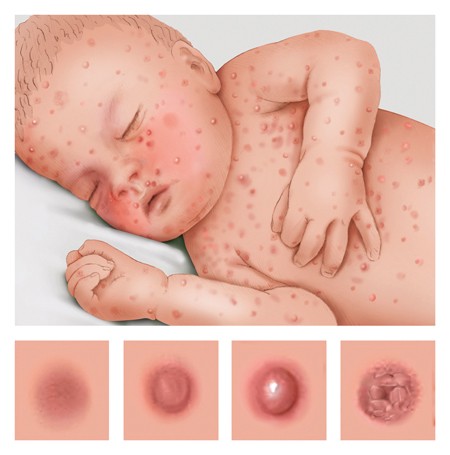 Baby with a typical chickenpox rash. Below: Development of a chickenpox blister

Chickenpox is caused by the varicella-zoster virus, which is one of the herpes viruses. These viruses spread from one person to another through droplets or direct contact. When someone who is contagious breathes, coughs, sneezes or speaks, tiny droplets of saliva are released into the air. Chickenpox is usually spread when people breathe in those droplets. Fluid from inside the blisters is also contagious if they break open or are scratched off. Almost any contact with someone who has chickenpox leads to infection – unless you are either vaccinated or have already had chickenpox yourself.

Chickenpox is most likely to affect preschool and school-age children between the ages of 2 and 10. Older children or adults who haven’t been vaccinated can also become infected if they didn’t have chickenpox when they were younger.

As of 2004, chickenpox vaccinations have been recommended by the German Standing Committee on Vaccination (STIKO) at the Robert Koch Institute in Berlin. Because most parents now follow this recommendation, the number of chickenpox cases has fallen considerably:

But chickenpox is still one of the most common childhood diseases.

After being infected, it usually takes about two weeks for the symptoms to start. The first symptoms may already appear one week after infection, but it can take as long as three weeks too (incubation period). In most children chickenpox goes away again within two weeks. 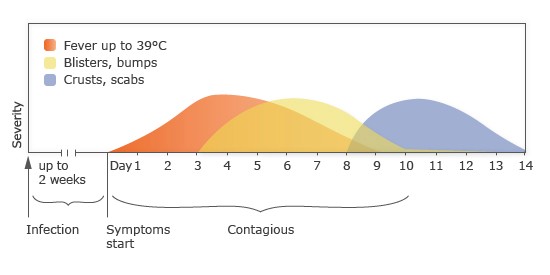 Adults who come down with chickenpox often have a more difficult time than children. The disease may last longer and make them feel more ill. The risk of developing complications is also higher in adults.

If you have already had chickenpox once, you are immune to it for life. So you can only get it once.

Breaking the itchy blisters open by scratching them may lead to a bacterial infection in the skin and leave scars. The risk of scarring is lowest if the scabs just fall off on their own. The amount of scarring will also depend on the size of the blisters.

The virus can also lead to pneumonia in adults with very severe cases of chickenpox. Very rarely the viruses may attack the central nervous system, resulting in meningitis or encephalitis. The risk of this happening is greater in people with a weakened immune system, for instance due to cancer, AIDS or another serious disease.

Once chickenpox has gone away, the varicella-zoster viruses are inactive but they stay in the body. The viruses may become active again many years later, leading to shingles. This condition causes a skin rash that can be very painful. It is most common in older people and people who have a weakened immune system. Adults with shingles can infect others who are not immune to the virus. Those people then develop chickenpox.

If a woman gets chickenpox within the first six weeks of pregnancy, the viruses can cause serious abnormalities in the unborn baby. A chickenpox infection close to a baby's due date can be life-threatening to the baby, whose immune system is not yet developed enough to fight off the viruses.

A doctor can usually diagnose chickenpox based on the very typical rash. Only if the disease is developing in an unusual way does blood or blister fluid need to be tested for the virus. Your blood can be tested for antibodies to find out whether you have already had chickenpox and are immune. This may be necessary in pregnant women.

The vaccination recommendations issued by the German Standing Committee on Vaccination (STIKO) apply to all children over eleven months of age, but also include the following groups, provided they have not had chickenpox already: teenagers, women hoping to get pregnant, and people who have certain other conditions such as severe eczema. In Germany, chickenpox vaccinations are covered by statutory health insurers. The vaccination consists of two injections given about four to six weeks apart.

If you have never had chickenpox and are not vaccinated, you can still get vaccinated within five days of coming into contact with someone who is infected. Doing that can keep you from developing chickenpox, or at least help make the symptoms milder.

Vaccinations should no longer be given during pregnancy, but pregnant women who are at risk of infection can also have antibodies injected to fight the viruses. This is called passive immunization, and it is also an option for newborns if their mother develops chickenpox a few days before or after the birth.

People who have been immunized can still get chickenpox. That rarely happens, though, and then the symptoms are usually milder. There is also a lower risk of complications.

As of March 2013, chickenpox is classified as a notifiable disease in Germany. This means that all doctors must inform their local health authority even if someone is only thought to have chickenpox. If a child is infected, the health authority might then contact the parents to tell them to keep the child at home until he or she is no longer contagious.

Anyone who has chickenpox should avoid direct contact with other people as much as possible – unless it's known that they've already had it. You should be especially careful around pregnant women and people who are at a higher risk of having more severe chickenpox.

How can you avoid getting chickenpox?

Usually only the symptoms of chickenpox are treated. In more severe cases, or if there is a greater risk of complications, antiviral drugs can be used to fight off the virus. Lotions, gels and powders are often applied to the skin in order to relieve the itching and dry out the blisters. Most of them contain tanins, zinc, menthol or polidocanol. Sometimes oral medication like antihistamines is also recommended to stop the itching. But there is no good-quality scientific research on how effective these treatments are.

Symptoms like fever or joint pain can be relieved using medicine that contains acetaminophen (paracetamol). The painkiller ibuprofen is not suitable for children with chickenpox. Children and teenagers can only take acetylsalicylic acid (ASA, the drug in medicines like Aspirin) if it has been prescribed by a doctor, and only as a last resort. This is because it can cause a rare but dangerous side effect called Reye’s syndrome in children and teenagers.

Not scratching the very itchy areas of skin can be very difficult. But it is still important to avoid scratching because the fluid in the blisters is contagious. Plus, blisters that have been scratched open tend to scar. It can help to keep children’s fingernails trimmed, or put cotton mittens on babies’ hands to make it more difficult for them to scratch themselves. Wearing loose-fitting clothing made of smooth fabrics can help prevent further skin irritation.

Having a shower is generally better than taking a long bath because then your skin doesn’t absorb as much water. It's best to carefully pat your skin dry after having a shower or washing yourself.

Siedler A, Arndt U. Impact of the routine varicella vaccination programme on varicella epidemiology in Germany. Euro Surveill 2010; 15(13): pii: 19530.