What kinds of allergy tests are there?

Allergies occur when the human immune system starts fighting substances that are in fact quite harmless, like pollen, dust or foods. The more sensitive the is to a particular substance that triggers an allergic reaction (allergen), the more severe the resulting symptoms are. Allergies may cause watery or red eyes, sneezing attacks, a stuffy nose, an itchy rash or stomach ache. In rare cases an may lead to an anaphylactic shock. Then the airways become narrow, making it very hard to breathe, and there is a severe drop in blood pressure. Anaphylactic shock can become life-threatening if not treated immediately.

Various tests can be used to find out what kind of substance is causing an allergic reaction: skin tests, blood tests and provocation tests. Your doctor will usually decide which test to use based on your description of the symptoms and your medical history.

How are skin tests done?

Skin tests are easy and quick to do, so they are often the test of choice for determining what is causing an . Possible triggers are applied to the skin and the reactions are observed. This is most commonly done on the inside of your lower arm, or sometimes on your back.

In this test the doctor puts a drop of watery solution containing allergens such as pollen or trace amounts of animal hair on different marked positions on your skin. A lancet is then used to prick your skin a little at each site so that the allergens can enter the skin. To test for a food allergy, the lancet can first be dipped in the food before being used to prick your skin.

If you are allergic to the substance, your skin will become red or a small bump (wheal) will appear at the marked site. The skin prick test is mainly used to detect allergies that trigger an immediate reaction when they make contact with the skin – such as hay fever or some food allergies. 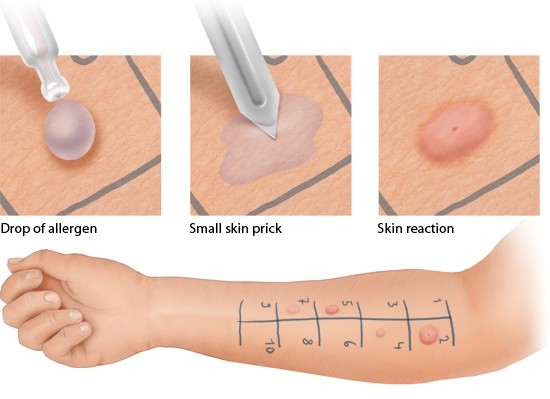 The procedure here is similar to that of the skin prick test, but the allergen solution is injected into the skin (intradermal injection) instead. Intradermal tests can also detect weaker allergic reactions.

Because the injections make the test somewhat unpleasant and the injections can also trigger stronger allergic reactions, this test is generally only used if a skin prick test did not show enough of a response.

A skin scratch test can be used if the results of the skin prick test are not clear. A small area of skin is removed and then the allergen is “rubbed” over the skin. This allows the substances to reach deeper layers of tissue than possible in the skin prick test, with the aim of achieving a stronger reaction. The skin scrape test is similar, but only the outermost layer of skin is removed.

In these tests it is not possible to regulate exactly how much of the allergen enters the skin and tissue. They are also more likely to cause non-allergic skin irritation than the skin prick test is. So this test is considered to be less reliable.

If your doctor thinks that your skin will react very strongly, the substance can simply be rubbed onto your forearm without breaking your skin. Compared to the skin prick test, it will take a little longer for the results to appear: If you have an , the area of skin will turn red and bumpy after about 20 minutes.

This test is used if you are thought to have an where the symptoms only become apparent one half to three days after contact with the allergen. The triggers are often single substances found in:

A patch containing the suspected allergens is put on your back and left on for one full day. If there is no reaction after it is taken off, your skin is checked again after another 24 hours, and sometimes again three days after removing the patch. If you have a contact , your skin will react in the same way it does when it is inflamed (contact dermatitis). The skin becomes swollen, turns red and starts to itch, and small blisters may form.

What do blood tests do?

To find out what is triggering an , a blood test may be needed too. It is considered if, for example, a skin disease may influence the results of the skin prick test, or if a skin test would cause too much of a reaction due to a known severe . Sometimes a blood test is used to confirm the results of a skin test that didn't provide clear enough results.

Blood is taken from a vein in the arm for this test. The blood is sent to a laboratory, where the number of a specific type of antibodies – the IgE antibodies – is measured. If someone has an they may have more of these antibodies in their blood. But this test is only a sign of an , and not proof. Higher numbers of IgE antibodies can also be caused by other things, such as smoking or a parasite infection. The amount of these antibodies does not necessarily correspond to the severity of the symptoms, either.

How do provocation tests work?

Someone who has symptoms may not have a strong allergic reaction on their skin. Then a provocation test can be used to help find out what the trigger is.

To see if you have hay fever, for instance, an exact amount of the allergen thought to be triggering it – such as certain types of grass pollen – can be applied to the mucous lining of the nose. Then the doctor can observe whether and how strongly the body reacts with sneezing, a stuffy nose and watery eyes. Allergens can also be tested in a similar way on your eyes or lungs. Provocation tests are usually only done under medical supervision because they can cause very severe allergic reactions.

What basic things should you know?

The search for an trigger follows a sequence of steps: A skin test is usually done first, once you have talked with a doctor. A blood test is done instead if a skin test is too difficult or risky, or if the allergen in question isn’t available in a solution that can be used in skin tests. Provocation tests are only considered if the skin test or a blood test haven’t provided clear results.

Before you have a skin test, it is a good idea to tell the doctor if you have any medical conditions affecting your lungs or skin, or if you have any cardiovascular (heart or blood vessel) problems. It is also important to mention any medication you are taking that may affect how your skin reacts, such as the amoxicillin or penicillin, or painkillers like acetylsalicylic acid (the medication in drugs like “Aspirin”) or ibuprofen.

You should have no noticeable acute allergic symptoms right before doing a provocation test. Your doctor should be ready to respond quickly to any strong allergic reactions that may arise during skin tests, and particularly during provocation tests.

What kinds of allergy tests are there?