The fights germs and foreign substances on the skin, in the tissues of the body and in bodily fluids such as blood. The is made up of two parts: the innate, (general) and the adaptive (specialized) . These two systems work closely together and take on different tasks. 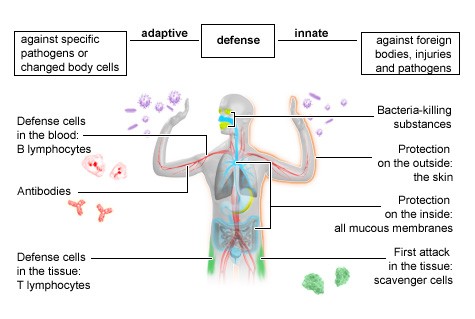 The innate is the body's first line of defense against germs entering the body. It responds in the same way to all germs and foreign substances, which is why it is sometimes referred to as the "nonspecific" . It acts very quickly: For instance, it makes sure that that have entered the skin through a small wound are detected and destroyed on the spot within a few hours. The innate has only limited power to stop germs from spreading, though.

The innate consists of

Protection offered by the skin and mucous membranes

All outer and inner surfaces of the human body a key part of the innate . The closed surface of the skin and of all mucous membranes already forms a physical barrier against germs, which protects them from entering. Additionally, chemical substances like acid, enzymes or mucus prevent bacteria and viruses from gaining a foothold. Movements created, for example, by hair-like structures in the (cilia) or bowel muscles stop germs from settling in the body. Tear fluid, sweat and urine (which flushes the organs of the urinary tract) have a similar effect.

The innate activates special cells and proteins if germs get past the skin and mucous membranes and enter the body.

What happens during an inflammation?

When a part of the skin is infected, cells move to the area or cells that are already there are activated. Specific cells release substances into the immediate area that make the blood vessels wider and more permeable. This causes the area around the to swell, heat up and redden, and inflammation results. A fever may develop as well. Then the blood vessels expand further and even more cells arrive.

Certain proteins (enzymes) are also activated to help in the immune response (see below).

Bacteria or viruses that enter the body can be stopped right away by scavenger cells (phagocytes). Scavenger cells are special kinds of white blood cells (leukocytes). These cells enclose germs and "digest" them. The remains of these germs move to the surface of the scavenger cells to be detected by the adaptive .

There are also other types of cells that release substances to kill and various germs. Both germs and body tissue and cells die and decay during an response. Their remains form pus, a yellowish fluid.

The role of proteins

Several proteins (enzymes) help the cells of the innate . A total of nine different enzymes activate one another in a process similar to a chain reaction: One enzyme in the first stage alerts several enzymes of the second stage, each of which again activates several enzymes of the third stage, and so on. This allows responses to escalate very quickly.

The tasks of these enzymes include:

The natural killer cells are the third major part of the innate . They specialize in identifying cells that are infected by a or that have become tumorous. To do this, they search for cells that have changes in their surface, and then destroy the cell surface using cell toxins.

The adaptive takes over if the innate is not able to destroy the germs. It specifically targets the type of germ that is causing the . But to do that it first needs to identify the germ. This means that it is slower to respond than the innate , but when it does it is more accurate. It also has the advantage of being able to "remember" germs, so the next time a known germ is encountered, the adaptive can respond faster.

This memory is also the reason why there are some illnesses you can only get once in your life, because afterwards your body becomes “immune.” It may take a few days for the adaptive to respond the first time it comes into contact with the germ, but the next time the body can react immediately. The second is then usually not even noticed, or is at least milder.

The adaptive is made up of:

T lymphocytes (also called T cells) are produced in bone marrow and then move to the thymus through the bloodstream, where they mature. The "T" in their name comes from "thymus."

T cells have detection features on their surfaces that can attach to germs – like a lock that one particular key will fit. The can produce a matching T cell type for each germ in an within a few days.

Then if a germ attaches to a matching T cell, the T cell starts to multiply – creating more T cells specialized to that germ. Because only the cells that match the germ multiply, the immune response is customized.

B lymphocytes (B cells) are made in the bone marrow and then mature there to become specialized cells. They take their name from the "B" in "bone marrow." Like the T cells, there are many different types of B cells that match particular germs.

The B cells are activated by the T helper cells: T helper cells contact B cells that match the same germs that they do. This activates the B cells to multiply and to transform themselves into plasma cells. These plasma cells quickly produce very large amounts of antibodies and release them into the blood. Because only the B cells that match the attacking germs are activated, only the exact antibodies that are needed will be produced.

Some of the activated B cells transform into memory cells and become part of the "memory" of the adaptive .

An antibody only attaches to an antigen if it matches exactly, like a key in the lock of the antibody. That is how antibodies detect the matching germs to initiate a fast response from the adaptive .

The antibodies of the adaptive also support the innate .