And they can be used to monitor the treatment outcomes and the course of chronic lung diseases like or . They are sometimes part of employee health check-ups too, or used in sports medicine.

There is no need to prepare for a lung function test. It doesn't hurt or have any side effects. But you shouldn't smoke right before the test, and you should make sure you don't eat or drink too much. If you need medication, such as an spray, it is best to first ask the doctor whether you can still use it as you would otherwise. 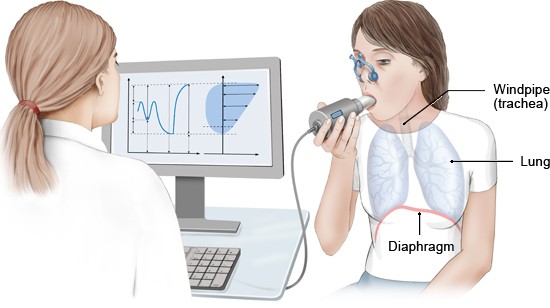 Spirometry can help find out things like how narrow the airways are in someone who has , or determine how severe lung hyperinflation is in pulmonary .

It involves sitting in an airtight chamber and breathing in and out of a mouthpiece, like in the spirometry test. When you breathe in and out your chest moves up and down, causing the pressure inside of the chamber to change. The changes in pressure are used to determine the amount of air you inhale and exhale, and also the amount of air that stays in your lungs (residual volume). Even when you exhale as hard as you can, a small amount of air remains in your lungs. Airway is also measured. This goes up if the path through the is narrowed, for instance by or .