Chronic obstructive pulmonary disease () causes permanent damage to the lungs and narrows the airways (). This makes breathing difficult once the disease has reached an advanced stage. At that point, even everyday activities such as climbing stairs, gardening, or taking a walk can leave you out of breath.

doesn’t arise overnight. Instead, it develops gradually over the course of many years. Symptoms like a persistent cough are often initially mistaken for a "normal" smoker's cough or . People often first find out that they have when their symptoms get worse. By that time, many of them are already over 60. treatments aim to stop or at least slow down the progression of the disease. The most important thing to do is quit smoking. Medicine can relieve symptoms and prevent shortness of breath. Education programs designed for patients can help them cope with the disease.

The potential capacity of your lungs is very large. When relaxed, your body only needs less than a tenth of the amount of air your lungs can handle during strenuous exercise. This flexibility is the reason why lung function can gradually worsen over many years without noticeably affecting your day-to-day life. Shortness of breath caused by only becomes apparent once the capacity of your lungs has already decreased a lot. The typical symptoms of include the following:

Phases in which the disease suddenly gets much worse, known as flare-ups or exacerbations, are also typical. They are usually characterized by acute episodes of shortness of breath and more coughing with sputum.

Several factors play a role in the development of . One is persistent of the . Also, the air sacs () in the lungs may become over-inflated. This condition is called pulmonary .

A type of long-term cough called chronic may develop if the airways are frequently exposed to harmful substances such as tobacco smoke, dust, or gases. This destroys the cilia (tiny hairs that line the inside of the like a carpet).

The cilia are normally able to move and are covered by a thin layer of mucus. Dust and germs from the outside air usually become trapped in this mucus layer, which prevents them from reaching the lungs. The cilia then transport the mucus out of the . This self-cleaning function is very important for healthy lungs. If the cilia are damaged, they aren’t able to move the mucus out of the lungs, and the become clogged.

In pulmonary , the walls of the air sacs are damaged. Instead of there being many small air sacs, large air sacs develop. This decreases the surface area of the lungs, and less oxygen can enter the bloodstream. If someone has both inflamed, narrow and pulmonary at the same time, each can make the other worse. 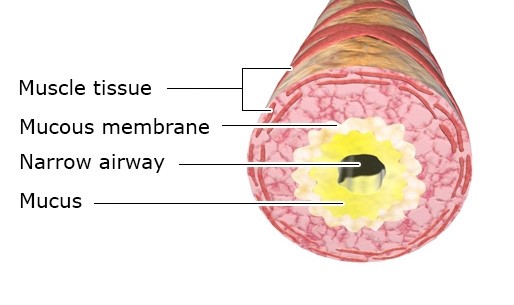 There is a strong link between smoking and . Although not all smokers develop , most people who have it do smoke or used to smoke.

Other kinds of regular lung irritation, such as exposure to particular types of dust particles in the workplace, can also increase your risk of developing the disease.

It is thought that certain factors already present at birth may make some people more likely to develop later on. Examples include problems with lung development in the womb and the rare “alpha-1 antitrypsin deficiency (AATD),” which affects about 1 to 2 out of 100 people who have .

It is estimated that between 5 and 10 out of 100 people over the age of 40 have , making it more common than . Men are affected much more often than women.

The symptoms aren’t obvious at first, but even people with mild often have a cough with sputum. Their airways are only slightly constricted in the early stages of the disease, so they hardly notice the gradual loss in lung function. Over time, though, they start having more problems breathing during physical exercise. They also start coughing more, with more sputum.

Advanced greatly affects your quality of life. Your airways become so narrow that you get out of breath during everyday activities like washing yourself or getting dressed, or even while resting.

At advanced stages of , the lungs can no longer provide the body with enough oxygen. This also affects other organs such as the heart, which now has to pump more blood through the lungs. The increased workload causes part of the muscle on the right side of the heart to grow. The medical term for this is pulmonary heart disease or “cor pulmonale.” The heart becomes weaker as a result, which can lead to things like water retention in the legs and the rest of the body.

Because of the problems caused by physical exertion, people with exercise less. This means that they lose muscle mass, which makes them even less physically fit.

In people with , respiratory infections that would otherwise be harmless can cause their lung function to suddenly decline and make their symptoms a lot worse. These attacks, called flare-ups or exacerbations, often need to be treated in the hospital. Flare-ups may also be caused by smoke, exhaust fumes or certain weather-related conditions such as heat, cold or high humidity. The following are typical signs of a flare-up:

Suddenly finding it harder to breathe usually makes people feel anxious, which can lead to even more trouble breathing. It is helpful to know how to react in these kinds of situations. An emergency plan of action can be useful here: It describes the typical symptoms and provides information on things like when it might be a good idea to change your medication schedule or dose, and when to see a doctor or go to hospital.

often goes undetected at first. Smokers in particular often think it is simply a harmless “smoker’s cough.” But symptoms like a persistent cough and frequent shortness of breath can be signs of .

Initial tests can often be done by a family doctor. Any additional examinations need to be done by a lung specialist (a pulmonologist).

Your doctor will first do a physical examination, ask about any other conditions you have, and take a blood sample. This is followed by tests that measure the performance of your lungs (lung function tests, spirometry). Depending on the results, further tests may be done to rule out other conditions such as asthma, heart failure, or lung cancer.

These tests can also be used to find out how advanced is and determine the risk of complications. This is important when it comes to planning your treatment.

The most effective way to prevent is to not smoke, or to quit smoking. This is often easier said than done. Strategies for quitting include combining a support program and nicotine replacement therapy.

Harmful substances in the environment or at the workplace can also increase your risk of developing and should be avoided as much as possible. Protective measures at work can help prevent constant exposure to these substances.

Flare-ups are often triggered by respiratory infections (infections of the airways). A sore throat, sweats and fever can weaken your body even more if you already have . Because of this, people with should take special care to avoid infection during the cold and flu season. This includes avoiding contact with people who have colds and with large crowds. It may also be a good idea to have a flu vaccine or pneumococcal vaccine.

One aim of treatment is to relieve symptoms, making everyday life easier and improving quality of life. A further aim is to slow down the progression of the disease and prevent exacerbations.

Medication is an essential part of daily treatment. It can either be inhaled (breathed in) or taken in the form of tablets. Depending on how far the disease has progressed, combinations of various drugs are commonly used. The following medications are available:

At very advanced stages of , oxygen therapy is often needed as well. Different types of oxygen therapy are used, depending on how severe the disease is.

If all other treatment options for severe pulmonary have been tried out, surgery is possible as well. Then the overinflated parts of the lungs are reduced in size through a procedure called bullectomy or through lung volume reduction surgery. A lung transplant may even be considered in some situations.

Supportive measures include physical exercise, breathing exercises, inhalation, or changes in diet. In Germany, statutory health insurers also offer disease management programs (DMPs) for people with . The aim of these programs is to provide consistent treatment in close cooperation with medical professionals to reduce the number of severe flare-ups and slow down the progression of the disease.

Medication for COPD
Non-drug treatments
Surgical procedures for the treatment of COPD
Coronavirus: What to be aware of if you have COPD

Pulmonary rehabilitation helps people with to better cope with their disease and to live as normal a life as possible. To help reach this goal, a treatment plan based on individual needs is created. The treatment plan includes a combination of physical exercise, an educational program on dealing with the disease and the treatment, and social and emotional support.

Pulmonary rehabilitation is an important part of the disease management program (DMP). Rehabilitation can either be done on an inpatient or outpatient basis.

The impact has on everyday life very much depends on the stage of the disease. For years it may only cause minor problems, but the symptoms get worse as time goes by. In advanced it's no longer possible to live a normal life, and eventually people will usually need extensive support and nursing care.

Many find it helpful to adjust their lifestyle and daily routine according to their body's needs and responses. Some focus more on things that are especially important to them. Other people find specialized breathing and relaxation exercises helpful, allow themselves lots of rest or do low-impact sports when they feel up to it.

The more the disease progresses, the greater the need for practical and emotional support from family and friends.

What can help you to cope with COPD?

In addition to disease management programs (DMPs), a wide range of different services for individual counseling and support is available if you are ill. There are many regional differences in how these services are organized, and they are not always easy to find. A list of points of contact can help you to locate and make use of these services.