Most people's hands briefly "fall asleep" every now and then. The hand then feels numb or tingly. Although this is unpleasant, it's usually over very quickly. Carpal tunnel syndrome has similar symptoms – but they keep coming back again and are often painful.

The carpal tunnel is a passageway inside the wrist that is surrounded by bones and connective tissue. It is located on the inner side of the wrist at the base of the hand, and is covered by a strong, fibrous band made up of connective tissue, called the transverse carpal ligament. Tendons and the median nerve run through the carpal tunnel. This nerve is responsible for sensation and movement in the ball of the thumb and some parts of the hand. If the tissue inside the carpal tunnel swells up, it can push against the median nerve, which is what causes carpal tunnel syndrome. The symptoms often go away on their own, but they can sometimes last for quite a long time. Various treatments can provide relief. 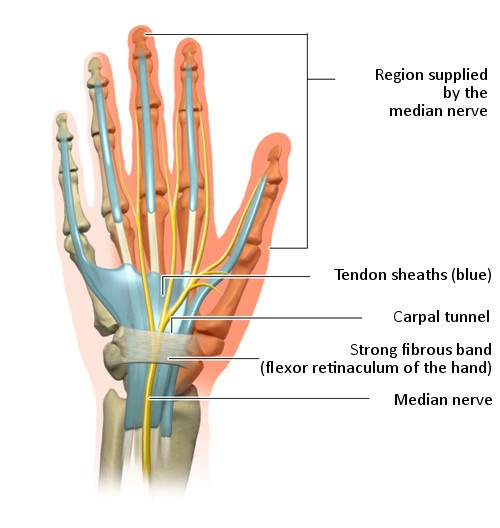 The carpal tunnel and the nerves in the hand

Symptoms arise if the tissue in the carpal tunnel becomes swollen, putting pressure on the median nerve.

Carpal tunnel syndrome can cause the following symptoms:

These symptoms are most common at night and in the morning. They usually affect both hands, but not necessarily at the same time. Shaking your hands often improves the symptoms.

It's often difficult to tell exactly what caused the tissue to swell. Overusing the hand and wrist sometimes plays a role. This may happen if you, for instance, put too much pressure on your wrist, or overstretch or bend it too far. Repetitive activities like using a jackhammer, which makes the wrist vibrate a lot, can also cause the tissue to swell.

Some conditions can make you more likely to develop carpal tunnel syndrome. These include rheumatism, diabetes, wrist injuries and repeated tendon sheath inflammations. Pregnant women are at greater risk because more fluid builds up in their body’s tissue.

The symptoms may suddenly become very severe, but this only rarely happens. Known as “acute carpal tunnel syndrome,” it is usually caused by an inflammation, injury or bleeding in the wrist.

Some people may have only mild symptoms which come and go over many years. It is estimated that, left untreated, the symptoms go away within six months in about 1 out of 3 people. In others, the symptoms don't go away. If the condition worsens, the hand may feel numb all the time. In later stages, carpal tunnel syndrome can cause the muscles on the ball of the thumb to waste away (atrophy). If your hand becomes weaker and you can't feel it properly, it can be difficult to do everyday things like hold a teacup.

Your doctor will first ask you about your symptoms and then examine your hand and wrist. There are specific tests to see how well the hand and fingers can move and feel things.

Electrophysiological tests like electroneurography (ENG) may also be needed to find out whether carpal tunnel syndrome is in fact causing the symptoms. This test can measure how effectively the electrical signals are being carried by the nerves, and how well the nerves are working. The results are considered together with the described symptoms, the physical exam, your life circumstances and medical history.

It's also important to rule out other possible medical causes. For example, changes in the cervical spine (the bones in your neck) may irritate the nerve roots, causing similar symptoms. Other nervous system diseases such as polyneuropathy can also have this effect.

Mild to moderate carpal tunnel syndrome can usually be treated with a splint at first. The splint is worn at night to prevent the wrist from bending. Doctors may also advise you to avoid activities thought to be related to this condition.

Injecting steroids into the carpal tunnel can temporarily relieve the symptoms. They aren't effective in the long term, though.

If the carpal tunnel syndrome doesn't go away, surgery may be considered. This involves cutting the flexor retinaculum that arches across the base of the hand The aim is to reduce pressure on the median nerve. This procedure can make the symptoms go away for good, but it's not always necessary. Other treatments are usually tried out first, especially if the condition is still in an early stage. Urgent surgery is usually only needed for treating a rare condition called acute carpal tunnel syndrome.

Some early research results suggest that extracorporeal shock wave therapy (ESWT) can relieve the symptoms somewhat. In shock wave therapy, a device is used to send high-pressure sound waves through the skin. In Germany, the costs of this treatment are usually not covered by statutory health insurers.

Other treatments such as acupuncture, ultrasound therapy, laser therapy or magnetic field therapy may also be recommended. But there is no evidence that they are effective in the treatment of carpal tunnel syndrome.

Many people take painkillers to relieve their symptoms – particularly non-steroidal anti-inflammatory drugs (NSAIDs), which are available over the counter at pharmacies and drugstores. Taking vitamin B6 products is sometimes recommended too. They are claimed to strengthen the nerves. So far, though, research suggests that neither NSAIDs nor vitamin B6 can provide enough pain relief.

Wrist splints and hand exercises
How effective are steroids?
When is surgery considered or needed?

Kozak A, Schedlbauer G, Wirth T, Euler U, Westermann C, Nienhaus A. Association between work-related biomechanical risk factors and the occurrence of carpal tunnel syndrome: an overview of systematic reviews and a meta-analysis of current research. BMC Musculoskelet Disord 2015; 16: 231.