A lot of children have enlarged tonsils or adenoids. This can make their airways narrower, causing them to snore and stop breathing for short periods of time while sleeping. If their sleep is affected over the long term, it can lead to various problems and sometimes even to medical conditions. Because of this, doctors often recommend surgery to remove the extra tissue.

Adenoids are not to be confused with nasal polyps. These are benign growths in the membranes lining the nose. They usually only grow in adults. It is also important not to confuse enlarged tonsils with tonsillitis (an inflammation of the tonsils). These are two different medical conditions.

The possible signs of enlarged tonsils or adenoids include the following:

The main symptoms will depend on things like whether it’s the palatine tonsils or the adenoids that are enlarged. For instance, enlarged adenoids mainly affect your ability to breathe through your nose. Pauses in breathing during sleep, on the other hand, are mainly caused by enlarged palatine tonsils.

If children don’t get a good night’s sleep, they don’t feel rested during the day. Rather than appearing to be tired, they then tend to be fidgety or “wired.” But they may suddenly be overcome with tiredness, for instance during car journeys. Extreme tiredness only becomes more obvious in older children and teenagers.

If children often have pauses in breathing and wake up frequently at night, they may develop obstructive sleep apnea (OSA). They then have hardly any deep sleep, which are the “restful sleep” phases. 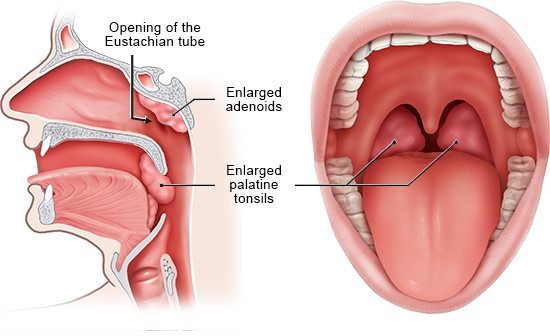 Left: Cross section of the head from the side, Right: View into a mouth with enlarged tonsils

Enlarged adenoids or tonsils don’t cause any problems in many children. About 7% of all children snore all the time, and about 2% have nighttime breathing pauses and obstructive sleep apnea. These problems are often caused by enlarged tonsils or adenoids in children, particularly between the ages of 3 and 6 years.

Enlarged tonsils or adenoids can lead to the following problems:

The consequences of enlarged adenoids or tonsils will mainly depend on how narrow the child's airways have become, whether they have breathing pauses during sleep, and how long they have had these problems. Sometimes the symptoms go away again after a while.

Sleep apnea is more likely to lead to other medical problems than snoring is. But snoring loudly and regularly breathing through your mouth can have consequences too. Snoring quietly every now and then – for instance, due to a cold – is harmless, though.

When children have the above-mentioned symptoms, their parents often first seek advice from their family doctor or pediatrician. They will then usually be referred to an ENT (ear, nose and throat) doctor for further diagnostic tests.

The doctor first asks about the symptoms. He or she then looks at the child’s throat to see how big their tonsils are and how narrow their airways have become as a result. The child’s ears are examined too, for instance to see whether they have glue ear. Their hearing and speech is tested as well. It is also important to rule out other possible causes of the symptoms, such as allergies or a jaw misalignment.

In rare cases, doctors recommend going to a sleep laboratory. This can be a good idea if it is thought that a child has obstructive sleep apnea, if the child is very young or if other diseases or disabilities may play a role. Obstructive sleep apnea can only be diagnosed with certainty in a sleep laboratory. But this step is often not taken in people with enlarged adenoids or tonsils because it involves a lot of time and effort, and there are only limited appointments. What’s more, children often find it hard to do what they are meant to do in sleep laboratories.

It isn’t always easy to determine the point at which enlarged tonsils or adenoids become a health problem. For instance, how "bad” does snoring have to be to warrant having surgery? Different doctors may give different advice. One thing they generally agree on, though, is that long-term sleep apnea has negative effects on the child and should be treated.

If the child only snores every now and then, only snores quietly or usually only when they have a cold, there is no need for treatment.

These are the treatment options:

If both the adenoids and the tonsils are enlarged, they can be (partially) removed in one operation. If a child has persistent glue ear, doctors often recommend that they have grommets implanted during the operation too. These narrow tubes improve the exchange of air between the middle and outer ear.

Our decision aid may help when deciding whether or not to have surgery for enlarged palatine tonsils. It summarizes the main advantages and disadvantages of the various treatment options.

Surgery for enlarged tonsils or adenoids