Measles is caused by viruses and is very contagious – both in children and adults. This disease usually has no lasting effects, but it is not harmless.

The measles viruses weaken the body’s over a period of several months. They can also cause other infections, such as a middle ear infection or pneumonia. In very rare cases, measles may cause encephalitis ( of the brain), which can be fatal.

In order to prevent the spread of the and possible serious effects, as many children as possible should be vaccinated. Adults should also be vaccinated if they haven't yet had the , were only vaccinated once (only received the first dose) and have never had the measles.

Measles infections usually have two phases. In the first phase they cause symptoms like:

The fever goes down within a few days. Then a light red rash develops, and the person's body temperature increases again. This may result in a febrile seizure.

The spotty rash starts on the face and behind the ears before spreading across the rest of the body. The spots become larger and join up to form bigger patches. Once the rash has cleared up after a few days, the skin often turns scaly. The fever goes down again after about one week. 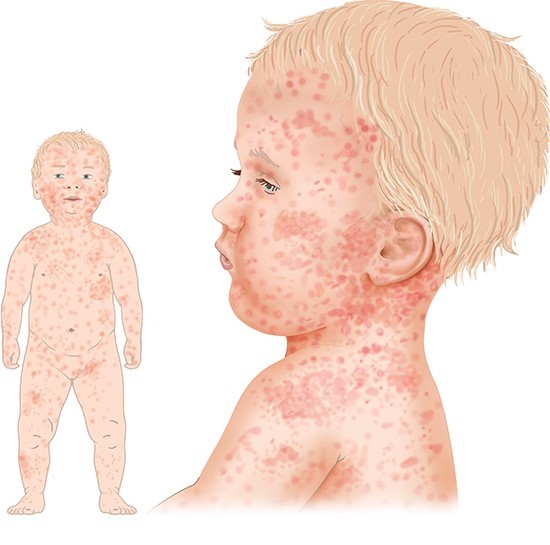 Typical rash in a child who has measles

In rare cases the is milder, with a hardly visible rash and fewer symptoms. This weaker ("mitigated") form is still contagious, though. It is more common in people who are only partially immune to measles because they were only vaccinated once (only received one dose). Milder cases of measles can also occur in newborn babies.

Measles is caused by viruses that infect your nose and throat, for instance. The viruses are typically spread through droplets that are released into the air when we speak, cough or sneeze (droplet ), as well as through even smaller droplets in the air (aerosols). They can also stick to our hands or objects such as doorknobs.

You can catch measles even through very brief contact with someone who has it. Measles spreads especially quickly in groups where a lot of people haven't been vaccinated.

Overall, far fewer people get the measles nowadays thanks to the introduction of the measles vaccine in the 1960s: for instance, in Germany about 300 to 2,000 people have this disease each year. Measles used to be a childhood disease – but it is now more common in unvaccinated teenagers and adults.

Isolated outbreaks are limited to certain regions or places where too few people have been vaccinated.

Nearly everyone who is infected with the measles will also develop symptoms. Noticeable symptoms start about one to two weeks after . It usually takes another two weeks to recover.

You are already at risk of infecting other people after three to five days, before the rash develops. You are no longer contagious five days after the rash appears.

You can only get measles once. After that, you are immune to it for the rest of your life.

The is weakened for a few months after becoming infected with the measles, and sometimes even for several years. This makes you more prone to other infections – such as a middle ear , laryngitis, , or gastrointestinal (stomach and bowel) infections. Measles is often worse in adults and toddlers than in older children.

A measles usually has no lasting negative effects. But it can have the following serious complications:

Babies, toddlers and adults have a higher risk of complications. People who have weakened immune systems are also more likely to develop complications.

Measles can cause premature birth and miscarriage in pregnant women as well.

Doctors can usually diagnose measles based on the typical rash and the other symptoms. But measles can easily be mistaken for other infections such as rubella or scarlet fever because the symptoms are similar. Because of this, if your doctor think you might have measles they will take a throat swab or a urine sample. The sample is tested for the in order to see if you really have measles. A blood sample can also be taken and tested for antibodies.

A safe and effective vaccine can be used to prevent measles. It is recommended for all children and all adults born after 1970 who have not yet had the or who were only given one dose of the vaccine.

The measles vaccine is combined with the mumps and rubella vaccines (MMR vaccine), or also with the chickenpox vaccine (MMRV vaccine). You can’t get a measles vaccine on its own in Germany.

The first dose of the vaccine is given at the age of 11 months, and the second dose is given at 15 months. Children who go to a daycare center before that can already be vaccinated from the age of 9 months.

After having the second dose of the vaccine, about 92 to 99 out of 100 people are immune to (protected against) measles. This protection usually lasts for the rest of their lives. In very rare cases people still get measles even though they have had the vaccine. This mainly happens in older adults who have only received one dose of the vaccine.

It is important that people have the measles vaccine in order to stop the disease from spreading. If most of the population has been vaccinated, that also protects people who can’t have the vaccine, such as young babies. This is known as herd immunity or the herd effect. The number of people who need to be immune in order to achieve this effect depends on how contagious the disease is. Because measles is highly contagious, as many people as possible have to have an effective .

Since the beginning of March 2020, people in Germany are sometimes obliged to prove that they have immunity to (protection against) measles: Before being allowed to go to a daycare center, school or other community facility, all children aged 1 and over have to prove that they have been vaccinated against measles or are immune to it. Immunity can be proven with a blood test to look for antibodies. This legal requirement also applies to people who work in those places and were born after 1970. Proof can be provided in the form of records, the child's health record booklet (“U-Heft” in Germany) or a medical certificate from the doctor.

There are no effective medications to fight the measles viruses. Painkillers or fever-lowering medications can relieve the symptoms, though.

It is important to get rest and stay in bed so that your body can recover. It may be necessary to go to the hospital if complications arise.

People who have measles should avoid close contact with other people in order to prevent passing it on to them. They shouldn't go to community facilities such as schools, daycare centers or nursing homes. This is also true if they work there. They should also avoid public events, parties and other social occasions where the can spread quickly.

It is important to inform everyone you have had personal contact with that you (may) have measles. This also includes calling the doctor's practice beforehand so that they can take the necessary safety precautions when you go there. People who don’t have enough protection against measles are advised to have the within three days if possible if they come into contact with someone who has the disease.

The risk of is only over once the symptoms have gone away – and at the earliest five days after the rash appears.

In Germany and other countries, measles is officially an infectious disease that must be reported. If a doctor suspects that you have measles, they have to inform the relevant health authorities immediately – even if the hasn't yet been confirmed.