Alcohol features in a lot of people’s daily lives, whether as a glass of wine with a meal, a beer after work with friends or while watching TV, or a glass of celebratory champagne. So, it's not surprising that around 20% of adults in Germany drink more alcohol than recommended. This is true regardless of age, education or gender.

Drinking alcohol in moderation from time to time is not a problem, but bigger amounts can cause problems. That is why a lot of people resolve to change their drinking habits, perhaps because:

It's not always easy to change drinking habits, but there are lots of strategies and support options which can help people to drink less. Free and anonymous advice is available in person, by telephone, or on the internet.

How much alcohol is too much?

Most countries have recommendations for “low risk” alcohol consumption. That refers to amounts which have no or only very minor health impacts.

Please note that these recommendations are intended as an orientation for healthy adults with no alcohol problems.

These amounts are described in grams. Other commonly used measurements include units of alcohol (1 unit = 8 grams) and standard drinks (1 standard drink = between 10 and 14 grams).

It's advisable not to drink any alcohol on at least two days a week to avoid developing a drinking habit. Two things are clear: 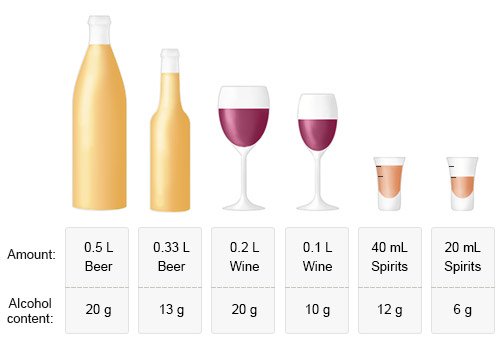 Drinking more than the recommended amounts from time to time does not mean that you have an alcohol problem. And most people do not drink the same amount every day. They may tend to drink less during the week and a little more at the weekend. As long as you don't binge drink, you can stick to the weekly limits. Studies show that drinking less than 100 grams of alcohol per week on average has no or only minor consequences for your health.

Eight facts about alcohol
When does alcohol become harmful?

What is binge drinking and why is it a problem?

Drinking a lot of alcohol in a short time is called binge drinking. That means six or more alcoholic drinks in a row. That is equivalent to more than 60 grams of pure alcohol, for instance 1.5 liters of beer or 600 ml of wine.

Binge drinking is a problem because people tend to take greater risks and have fewer inhibitions when they are drunk. That can easily cause accidents or lead to behavior you might later regret. What is more, very large quantities of alcohol can cause alcohol poisoning.

Binge drinking is widespread in Germany. About 40% of men and 25% of women binge drink at least once a month.

Do you have an alcohol problem?

Alcohol problems can take many forms. For instance, some people harm themselves with alcohol because they drink moderate amounts of alcohol on a daily basis, without ever getting drunk (“delta alcoholic”). They have usually already become accustomed to alcohol and need a minimum amount of alcohol in their blood to not have any withdrawal symptoms such as the shakes. Other people only drink rarely, however, but then can't stop and get so drunk that they end up in trouble (“episodic drinker”).

Not only the amount of alcohol, but also your drinking habits and the role alcohol plays in your life are decisive in determining whether you have an alcohol problem:

If you responded to one or more of these questions with “yes,” that could be a sign that you have a problem with your drinking behavior. It is particularly important that you seek help if you have mental illnesses such as anxiety or depression, and don't let the problems get worse because of alcohol.

But even if you answered all questions with “no,” you might still be doing yourself harm with alcohol. Scientists have developed questionnaire tests to identify possible alcohol problems. These tests seek to identify dangerous alcohol consumption at an early stage to prevent harmful effects.

One such test recommended by experts is the AUDIT questionnaire. You can fill it out here to check your own drinking behavior.

If the test results point towards an alcohol problem, it's a good idea to make some changes. Online support programs might be a good first step. You can also contact an addiction counseling service anonymously. If you have a trusting relationship with your family doctor, you can also arrange a counseling appointment with your doctor’s practice.

When is it best to say no to alcohol?

There are situations and activities where alcohol can lead you to put yourself and others in danger or commit a criminal offense. It is especially important to be sober

Alcohol can cause problems with certain illnesses, too. This is also true for some medication such as sleeping tablets and certain painkillers. This is because alcohol can intensify or reduce the effect of some medications, which makes people more prone to serious complications.

How can you try to drink less?

Even if you have made a resolution to drink less or no alcohol anymore, it is not all that easy to put that into practice, just as it is not easy to stick to a strict diet. Because alcohol reduces our inhibitions, some people also find it increasingly difficult to stop with each drink they have.

Low-risk alcohol consumption requires you to know your drinking habits and how much you drink. As it is easy to slightly misjudge, it can be helpful to make a note of how much and what types of alcoholic drinks you drink over a few weeks. You can also keep a written drinking diary, and some internet sites have blank diary sheets to help you.

There are also various helpful strategies for low-risk drinking. For instance, you could avoid situations in which you are easily led to drink. If you are at a party, only let someone top up your glass once it is empty. That makes it easier to keep track. Intending to only drink one alcoholic drink can also help. You can find a list with many other helpful tips here:

How can you manage to drink less?

What is alcohol dependence?

Alcohol dependence is an illness. It often develops gradually, and and its signs include

Alcohol dependence is diagnosed if at least three of these criteria are fulfilled.

Short-term withdrawal symptoms also include insomnia, restlessness, nausea, irritability and sweating. Symptoms such as palpitations, cramps and sometimes hallucinations can also develop after hours and days of withdrawal.

How is alcohol dependence treated?

It is important to know that going “cold turkey” and suddenly stopping drinking with an alcohol dependence without medical assistance can cause serious complications such as severe seizures. Medical advice is needed to prevent such problems.

The probability of relapse is very high after a purely physical withdrawal. That is why a qualified withdrawal treatment has been developed. It comprises several elements:

Long-term therapy after the qualified withdrawal treatment is very important to prevent relapses. This can include regular contact with an information center and the treatment of any other physical and mental conditions. Many people also find it helpful to join a support group where they can talk to other affected people and motivate each other.

Do you need to stop drinking alcohol completely after a withdrawal?

Experience shows that even a small glass can pose a very high risk of relapse. So it's important to not drink any alcohol at all after withdrawal.

Foods containing alcohol, such as certain sauces, pralines and desserts, should also be avoided. They can trigger a strong desire for alcohol in the brain and thereby increase the risk of relapse.

If you want to change your drinking habits, you can join an online support program or contact a number of information centers anonymously. That means you don't have to provide your name, address or health insurance details. You can also find advice and support there if you're worried about a loved one’s alcohol consumption.

Lots of people with alcohol problems try to get them under control on their own for a while before realizing that they need help. Feelings of shame and guilt often play a major role. However, there are many reasons for alcohol problems which have nothing to do with guilt or personal weakness. Those who manage to tackle them and seek support show courage and responsibility. It often takes several attempts to change drinking habits. But that's no reason to be discouraged.

Where can you find help and advice?
How can you help a family member or close friend with alcohol problems?