Besides surgery and radiation, medications are commonly used to treat cancer. One typical example of this is chemotherapy, which uses medications called cytostatics. These drugs aim to stop cancer cells from continuing to divide uncontrollably. What other goals can chemotherapy have, how is it done, what are its side effects and what can be done to reduce them?

The goals of chemotherapy

Chemotherapy in the treatment of cancer can have different goals. Doctors differentiate between the following types of chemotherapy:

Palliative chemotherapy: Chemotherapy is called palliative when it is no longer possible to remove all tumor cells. Chemotherapy can then help to relieve certain symptoms, to slow down the progress of the disease or to stop it temporarily, and to avoid complications.

How chemotherapy is done

The medications used in chemotherapy are usually given using an infusion into a vein (IV drip), but some medications can also be taken as tablets. There are many different cytostatics, which are often given in combination with one another. Because these medications travel in the bloodstream, they usually affect the whole body. So they can also reach cancer cells that aren't detected in examinations, and that can therefore not be targeted with surgery or radiation. This kind of treatment is known as systemic treatment.

In a few types of cancer it's also possible to use local chemotherapy. Then the medications aren't given through the bloodstream, but are instead injected directly into the affected part of the body, for example the spinal canal. In that way they only reach areas connected to the spinal canal, such as the brain or the membranes lining the brain and spinal cord. Basal cell carcinoma (a type of skin cancer) is sometimes treated with chemotherapy medications applied as a cream or an ointment, which only act locally. 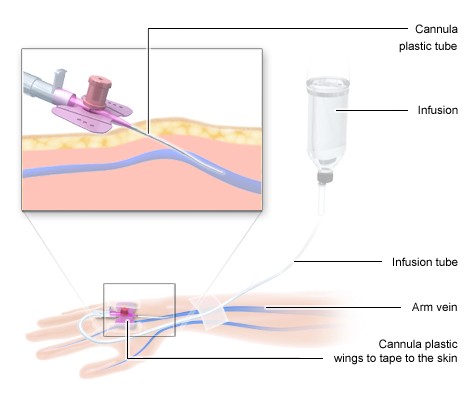 Chemotherapy: Infusion in a vein

People who receive cytostatics over a long period of time can sometimes get these drugs through a device called a port. A port is a small container that is inserted under the skin in an outpatient operation, and connects to a large vein with a thin tube. It can remain in the body for as long as the course of treatment lasts. This has the advantage that infusions can be connected to the port without having to look for a vein and puncture it for each treatment. 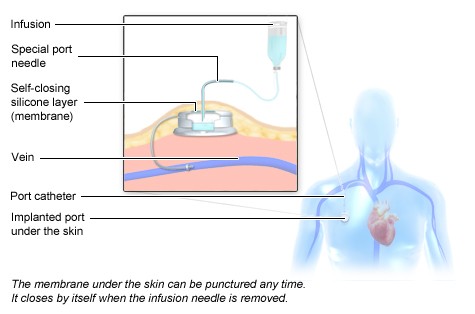 Chemotherapy: Infusion with a port

In chemotherapy, cancer is treated with cytostatics at specific intervals. This is also referred to as treatment cycles or treatment schedules. Various factors influence the number of cycles and the intervals between the individual treatments, including

Treatment schedules are tested in studies, which allows them to be optimized over time. How exactly a treatment is done not only depends on research results, though, but also on the individual's personal wishes and general health. If chemotherapy is causing severe adverse effects, for example, it can make sense to deviate from the commonly used treatment schedule.

Doctors can see whether a tumor is responding to the chemotherapy with the help of various examinations, such as blood tests, tissue samples and imaging techniques (e.g. ). If the treatment isn't working, other medications can be used instead, or the treatment can be stopped.

Chemotherapy no longer means that you have to stay in the hospital for a long time. One of the reasons is that it's now possible to better manage the side effects. Many hospitals offer outpatient treatments, as do many doctor's offices. It's even possible to do chemotherapy with tablets at home. But it may still be necessary to stay at the hospital for very intensive treatments. This is the case, for example, if there's a high risk of or if doctors have to do frequent checks, for example of kidney function.

Fear of side effects: Sometimes greater than necessary

Nowadays, many types of cancer can be treated successfully with chemotherapy. But people often still worry a lot about the side effects. Cytostatics usually attack not only the cancer cells, but also healthy cells that divide quickly. These include blood-producing cells, hair cells, and the mucous membrane cells in the mouth and throat area and in the digestive system. This can have short-term effects like hair loss, anemia, nausea, vomiting, diarrhea and infections in the mouth. But these side effects can often be prevented or the symptoms can be relieved: Blood transfusions help ease the effects of anemia, which mainly include tiredness and exhaustion. Anti-emetic (anti-nausea) drugs can often relieve nausea and vomiting. Infections can be prevented and treated with or antifungal drugs.

The severity of the side effects of chemotherapy varies. Some people tolerate cytostatics better than others. The possible side effects also depend on the dose and the specific drugs that are used. What's more, not all kinds of chemotherapy cause severe side effects, and most of them are temporary. Hair usually grows again after the treatment, and the mucous membranes and blood production typically return to normal.

The side effects of chemotherapy can sometimes occur after treatment has ended, particularly in young people. Because chemotherapy might damage sperm or eggs, people are advised to use reliable contraceptives during treatment.

The potential side effects of chemotherapy, and whether they're long-term or only occur during the treatment, will also depend on the kind of treatment, the type of cancer and the treatment schedule.