No one should have to put up with severe pain after surgery nowadays. There are now many different ways to effectively relieve this kind of pain. It’s important to let nurses and doctors know about any pain you might have.

If you have pain after an operation, it needs to be treated. Pain in the area of the surgical wound isn’t only sometimes very unpleasant, it can also delay your recovery. It’s generally important to start getting back on your feet again as soon as possible after surgery in order to stop your muscles from getting weak. Pain can prevent you from getting up and walking around. Lack of movement can also increase the risk of blood clots in blood vessels (thrombosis) and affect your ability to take deep breaths or cough. This can lead to serious complications.

What is important before surgery?

Pain after surgery is called post-operative pain (“post” means “after”). But pain management already starts before surgery, when the treatment is being planned. The doctor should tell you about possible pain after surgery so that you can be prepared for it.

It also helps to know what treatment is typically used to relieve pain after your kind of surgery, and what symptoms could be signs of complications. If it’s possible to manage your pain treatment yourself, it’s good to know about that before having the operation. The medical name for this kind of pain management is “patient-controlled analgesia” (PCA).

It’s also important to tell doctors about any pain you may already have before surgery, or if you are already taking any medication. People who already take strong painkillers (or drink alcohol or use other drugs) on a regular basis may need different kinds of medication after surgery.

How can you describe the pain?

Patients are usually asked whether they are in pain as soon as the anesthetic wears off after surgery. The more accurately you can describe your pain, the better it can be treated. To effectively treat the pain, nurses or doctors need to know

During your stay it is also important to tell nurses and doctors about how long the pain lasts, and if/when it goes away or gets worse.

Young children who can’t yet speak often show that they are in pain in other ways. They may cry or wail. But certain facial expressions, sounds or changes in behavior can also be signs of pain. Here it’s important that parents help the nurses to recognize these signs.

The same is true for people who aren’t able to express themselves properly. Someone close to them should help here, too.

What are the pain treatment options?

The severity of pain after surgery will depend on whether it was a big or small operation, for instance on the heart, abdomen (belly area) or knee. Sometimes the pain goes away quickly, and sometimes treatment is needed for a couple of days. Depending on the type of procedure, painkillers used during surgery may continue to have an effect afterwards.

After smaller operations with milder pain, non-opioid painkillers are generally used. These include medications such as acetaminophen (paracetamol), metamizole and non-steroidal (NSAIDs) like ibuprofen or diclofenac. They can either be taken as tablets, injected, or used in the form of patches, suppositories or drops.

After bigger operations with moderate to severe pain, stronger painkillers are usually needed. Opioids such as tramadol or morphine are often used then. They can be used in combination with other painkillers. Opioids are often given as an infusion:

When given through an intravenous drip, the pain medication has an effect throughout the entire body. When using an epidural , pain can be specifically treated in a certain region of the body.

If a fixed amount of medication flows through the drip or the , it is called continuous infusion. Other medications can be added to the infusion if needed. Sometimes it’s possible to regulate the dose of the infusion yourself using a pump. This is known as patient-controlled analgesia (PCA – see below).

Which methods are used near the spine?

The medications numb the spinal nerves, stopping them from carrying pain signals to the brain. Epidural catheters can be used for a couple of days. The infusion can deliver painkillers continuously or as needed.

Spinal anesthesia is a bit different. Here, the medication is injected directly into the spinal fluid, causing the lower half of the body to feel numb.

Whenever pain-relieving medication is delivered to the spine area, the area where the skin is pierced could become inflamed. In very rare cases the spinal cord may be injured or bleeding may occur. 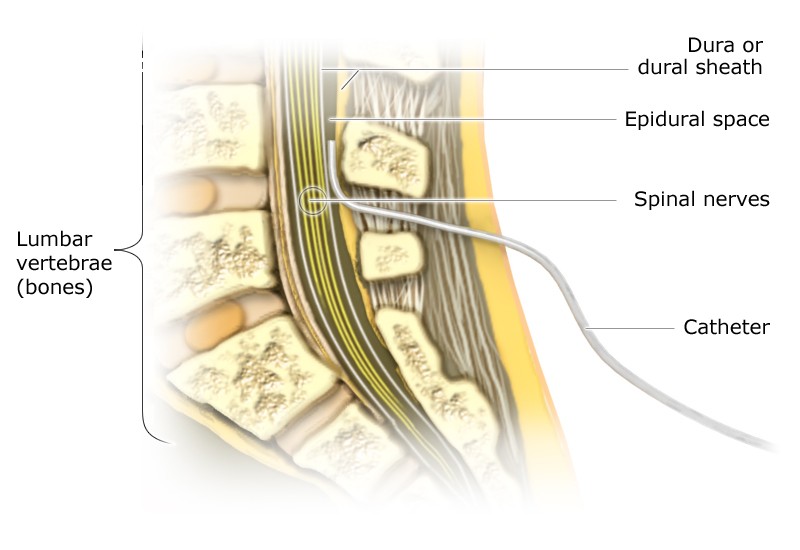 How does patient-controlled analgesia (PCA) work?

When using patient-controlled analgesia (PCA), patients can decide when to give themselves pain-relieving medication with the touch of a button. This approach involves inserting a cannula (tube) into a vein, for instance. The cannula is connected to another tube known as a , which leads to a pump that has one or more painkillers in it. When you feel pain, you can give yourself a fixed dose (also called a "bolus dose") of the medication. But the amount of times you can do this is limited so that you can’t use too much (overdose).

Scientific research shows that patients who used PCA had somewhat less pain after surgery and were more satisfied than those who received medication from their nurses or doctors:

But those who used PCA ended up taking a higher dose of pain medication overall. For this reason, side effects were more common in this group of patients.

What side effects do painkillers have?

The helpful effects and side effects of painkillers depend on the doses used: High doses may cause more side effects – but low doses might not relieve the pain enough.

Non-opioid painkillers such as non-steroidal anti-inflammatory drugs (NSAIDs), acetaminophen (paracetamol) or metamizole can cause side effects such as stomach and bowel problems, skin rashes or a drop in blood pressure.

Some of these problems might not be side effects of medication, but a result of the surgery itself instead. In any case, it’s important to tell your nurse or doctor about them right away – especially if you have trouble breathing.

Can pain be relieved without medication?

Some kinds of pain can be relieved using treatments other than medication. For instance, a surgery wound might hurt if the skin is taut (tight). In that case, simply adjusting the bed or lying in a different position might help. If the bed is too hard, putting a pillow or a piece of foam under that part of the body can relieve the pain.

Other things that can help you cope with pain include relaxation techniques, breathing exercises, distractions, and listening to music. Physiotherapy can help reduce pain too. This may involve exercises in bed, when you get up out of bed and when you walk around. After orthopedic surgery, the affected area is often cooled with cold packs.